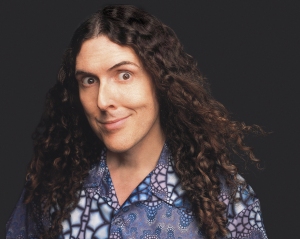 The undisputed king of pop culture parody, “Weird Al” has sold more comedy recordings than any other artist in history. In a career spanning nearly three decades, he has amassed 28 Gold and Platinum albums, 7 Gold and Platinum-certified home videos and 3 Grammy Awards (with 9 nominations).

An accomplished director, Al has helmed many of his own award-winning videos as well as clips for Ben Folds, Jeff Foxworthy, The Jon Spencer Blues Explosion, Hansen and The Black Crowes. His video for “Smells Like Nirvana” nominated for an MTV Video Music Award in 1992, was chosen by Rolling Stone as one of the “Top 100 Music Videos of All Time.”

Making a successful transformation from pop music satirist to multimedia star, Al created his own television special for MTV (AL-TV), Showtime and the Disney Channel, among others. His feature film “UHF” (1989) became an instant Top Ten best selling DVD upon its release in 2002, and his CBS network series “The Weird Al Show” reached cult classic status and was released on DVD earlier this year. Al has been featured on numerous TV shows and specials, and his profile on VH-1’s “Behind the Music” remains one of the most popular installments in the history of the series.

In 2014, Yankovic released “Mandatory Fun” online to strong critical praise. It was the #1 debut album on the Billboard charts the week of its release, making it his first #1 album. One song “Word Crimes” (a parody of Robin Thicke’s “Blurred Lines”) reached #39 on the Top 100 singles for the same week. It was Yankovic’s fourth Top 40 single, making him only the third artist ever, after Michael Jackson and Madonna, to have a Top 40 single in each decade since the 1980s.