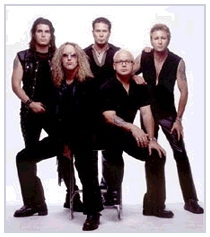 After gaining attention on the L.A. club scene, the band recorded a demo tape in September 1987 for Paisley Park Records.  The A&M label purchased an option to sign them.  After A&M allowed its option to lapse, the band signed a contract with Columbia Records, and in April 1988 they began recording their debut album Dirty Rotten Filthy Stinking Rich. The record spawned 3 hits: the No. 2 power ballads“Heaven” and “Sometimes She Cries”, and the rock anthem “Down Boys”.

The band’s second effort, Cherry Pie was released in March 1990, and featured guest appearances by Poison’s C.C. DeVille, Danger Danger’s Bruno Ravel and Steve West, and Fiona. The hits “Cherry Pie”, “Uncle Tom’s Cabin” and “I Saw Red” reached the Top Ten in the United States, and went on to sell 3 million copies. The record’s title track, only included on the album as a result of record company pressure, received strong exposure on MTV and became the band’s most successful single.

Over the years, the cast of Warrant changed but the music kept coming. In 1992, Warrant released Dog Eat Dog, in 1995, Ultraphobic. Belly to Belly was released in July 1996 in Japan and October 1996 in the United States. Under the Influence was released in May 2001.  The 2006 lineup consists of Jaime St. James (vocals), Erik Turner (guitar), Jerry Dixon (bass), Steven Sweet (drums) and Joey Allen (guitar).

If Warrant and their like-minded, hard-rockin’ peers have learned anything over the past few years, it’s that there’s power in numbers. Whether you call it nostalgia, hair rock, a flashback, or just plain rock ‘n’ roll, it’s striving, and Warrant are proud to be at the head of the pack. “I think this music has finally gotten old enough to be cool again Just like bellbottoms,” says Jerry Dixon with a laugh. “We took a lot of punches over the years, but I’m glad we stuck it out and lasted. Our approach to music is to just have a good time, and especially with everything that’s going on in the world, people don’t want to be bummed out anymore. We know the problems are there just like everyone else does, but when we’re onstage, Warrant’s about having a good time.”

Whatever the reason, the crowds are coming out in full force, and Warrant’s demand as a live act has continued to grow over. And why not? Especially when the very stations that turn Alien Ant Farm and Crazy Town into Top 40 pop superstars continue to play “Heaven” and “Cherry Pie” in frequent rotation. “When grunge hit, there was a definite backlash, but now we’re seeing bands who like Warrant, and aren’t afraid to mention Warrant in interviews,” say Erik Turner, citing OZZfest kingpins and Warrant fans Drowning Pool, as well as pop-rockers New Found Glory.

But even if radio were to swing full-circle, offering the same support they did more than a decade ago, the band still wouldn’t turn their backs on their past. “There’s a lot to be said about being nostalgic, but I think it’s great, and the best thing that can happen to a band,” offers Dixon. “Let’s be honest If you were to start in this business, and someone would promise that your band would survive for as long as we have, then be considered nostalgic and be able to tour amphitheaters 17 years later, would you take it? Of course you would! ”