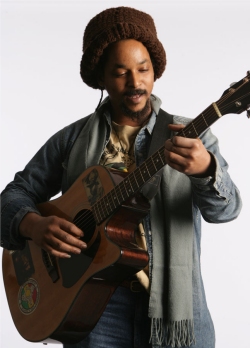 Kevin Davy, aka “Yvad” has been in the music business since he was a child, playing the guitar, piano and singing in the Moravian Church Choir iin his native Jamaica. Yvad bloomed into a realistic music song writer, producer & singer and created his own genre to be the true art form of reggae culture music.

In 1993, Yvad embarked upon a mission to build on his music career in Kingston and was inspired by the music of the legendary Bob Marley & Peter Tosh. Yvad was doing an acoustic piece with his guitar, at the Tuff Gong Museum, when he was approached by Stephen Marley, who was impressed with Yvad’s style. Yvad was introduced to Cedella Marley who eventually became his manager.

The release of Yvad’s first album, “Young Gifted & Dread,” garnered international attention. Yvad embraced Rasta Fari and his talent was so rigorous & prominent that his first single “We Need Love”, won an award at the Jamaican Music Award as best produced single in 1995. Yvad toured the world with the Marleys and was featured in a reggae special that was produced for & rotated heavily on BET. In 1997 Yvad was featured in the Marley Magic in New York City, Central Park along with the Marley family, Rita, Ziggy, Cedella, Stephen, Julian and Damion.

Yvad later toured with artists such as Mighty Diamonds, Israel Vibration, Bunny Wailer, Andrew Tosh and the Wailers. He performed at world events, such as, Reggae on the River, Reggae Sun-Splash and the Marley Magic tour. He formed his own record label called “Yvad Reggae” and was signed to Ras Records where he worked with Dr. Dread to produce the album called “Reggae for Kids”. Reggae for Kids was recognized worldwide.

In 2004, Yvad released the album “Justice” at the Ruff – Stuff Recording Studio in Brooklyn. Yvad touring with the Wailers from 2006 until 2013 as their lead singer, while still managing his solo music career, releasing more of his own material.

Yvad is a world-renowned artist who continues to promote the spirituality of reggae music and promote its message of “love, peace and unity.”

BRING JAMAICA TO YOUR EVENT!

BOOK YVAD, SOLO or with THE REGGAE RENEGADES