In 1959, Bob Bogle and Don Wilson, formed the nucleus of the original music group, The Ventures. The duo was joined about a year later by Nokie Edwards and Howie Johnson to record “Walk, Don’t Run”, which hit Billboard’s Singles Chart on July 18,1960 and peaked at #2. 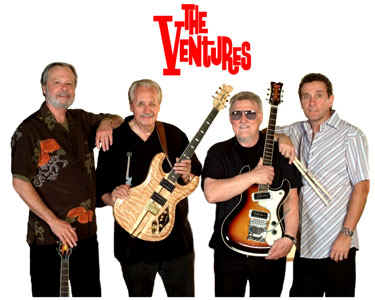 Since that spectacular beginning, The Ventures — later joined by Mel Taylor, John Durrill, Gerry McGee and Bob Spalding ~ have gone on to help define an often overlooked branch of rock and roll music -Instrumental Rock.

The Ventures remain active, recording and touring to the delight of the fans around the world.

Rock historians have said that the true hallmark of The Ventures is their durability and longevity, as they continue to this day to perform, to record, and to inspire fans, like they have done for decades. During their successful career, they have played an integral role in helping to forge the history of rock and roll music, primarily through their influence on the careers and styles of other musicians.

The list of superstars that credit The Ventures as an influence is endless. Included in the list are Jeff Cook (Alabama), Joe Perry (Aerosmith) and Roger Fisher (Heart). Gene Simmons (Kiss) and Jeff Baxter (Doobie Brothers) were once members of The Ventures Fan Club.

After the countless recording sessions that have produced hundreds of classic tracks, the thousands of memorable performances on tours of numerous countries, the generations of musicians motivated to learn the guitar and drums, the good and the lean times, and the passing of good friends, The Ventures remain rock solid!