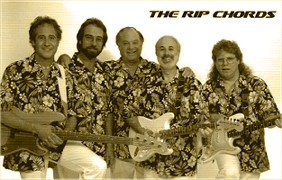 The Rip Chords are a California Group.Their songs tell stories of hot rods, the surf and boys and girls in love. When you think of California in the 60’s, you think of The Beach Boys, Jan and Dean, and The Rip Chords. No wonder. In 1964 “Cashbox” reported that“Hey Little Cobra” was #2 with a bullet (#1 was “I Want to Hold Your Hand” and #3 was “She Loves You”, but The Rip Chords forgive The Beatles.  In fact, they perform a few of their songs in concert!)

The Rip Chords twice toured with Dick Clark’s Caravan of Stars, appeared in “16 Magazine”, “Tiger Beat”, and more teen magazines of the 60’s.  They made a beach movie that starred Rachel Welch and co-starred Gary Lewis and the Playboys and The Righteous Brothers.

Fashion designers of this century have once again discovered “California Chic”. From New York to Los Angeles to London and to Paris, fashionable people are once again wearing Hawaiian shirts and puka shells.  Well, The Rip Chords never stopped!  The band takes the stage in surf board and hot rod decorated shirts, white jeans and sneakers. And then they rock.  And they rock.  And they rock… until they tear the house down!

The boys open their show with a couple of tunes by their colleagues The Beach Boys, then rip into a couple of their own hit recordings. Then they present hauntingly accurate versions of hit songs by some of their 60’s contemporaries. And then more hot rod hits. Some show. You just don’t hear live five-part harmony like this much anymore.  And the band rocks hard. Makes you sweat. Audiences seem to have to stand up and dance.

Original Rip Chord Richie Rotkin is proud of his band. So proud, in fact, that he can’t stand still. He’s in the audience, on the speaker monitors, rocking with the bass player, boogying with the drummer.  Thirty-six years later and the man is still a rock and roll animal. Pride does that to a man.

Experience The Rip Chords live in concert, and you’ll see why. They rock!