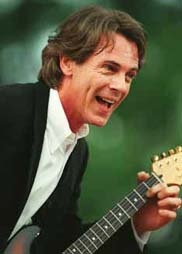 The son of an army officer, Australian rocker Rick Springfield first picked up the guitar at the age of 13.  In the early 60s, he began playing in bands. In the band Zoot, Rick wrote several hits. They also had a hit with a cover of ‘Eleanor Rigby’.

Rick went solo after Zoot’s breakup in 1971, and garnered his first U.S. success the following year with a re-recording of his Australian hit “Speak to the Sky”. Rick’s next album was the masterfulWait For Night, which unfortunately was abandoned promotionally when the parent record label collapsed in 1976. A breakthrough came when Rick was able to secure a recording contract with RCA on the strength of his next batch of demos. In the midst of recording what would become the quintessential pop album Working Class Dog, for his RCA debut, Rick was cast to play the young, eligible Dr. Noah Drake on General Hospital in 1981. Rick became one of the show’s most popular cast members in it’s history. His popularity skyrocketed, setting the stage for the imminent release of Working Class Dog later that year.

Powered by 3 Top 40 hits including the classic No. One Hit “Jessie’s Girl”, and the Top Ten follow-up “I’ve Done Everything for You”, as well as the party-starter, “Love is Alright Tonite”, Working Class Dog enjoyed multi-platinum smash success, and Rick eagerly left his first major TV role behind to fully focus on his first love of music when television taping conflicted with his sold-out tour schedule.

The follow-up album, Success Hasn’t Spoiled Me Yet, again reached multi platinum certification after its release in 1982, spawning the smash hit“Don’t Talk to Strangers”. Both multi platinum albums featured nods to Rick’s story of hard work and perseverance on their cover art as portrayed by his beloved canine companion, Ronnie. 1983’s Living in Oztook an edgier stance musically, spawning the Top Ten Hit “Affair of the Heart”, as well as the crowd pleaser “Human Touch”. When Springfield made his big screen debut in 1984 for the movie Hard to Hold, the soundtrack found Rick with another Top Five hit, “Love Somebody”.

Rick’s prolific recording career continued to flourish. With sales of well over 19 million records and 17 Top 40 hits to his credit, Rick has performed for millions of fans throughout his career. Rick continues to play 100 shows a year, sharing his love of performing and amazing talent with energetic shows by this fantastic rocker, who shows no signs of slowing down!