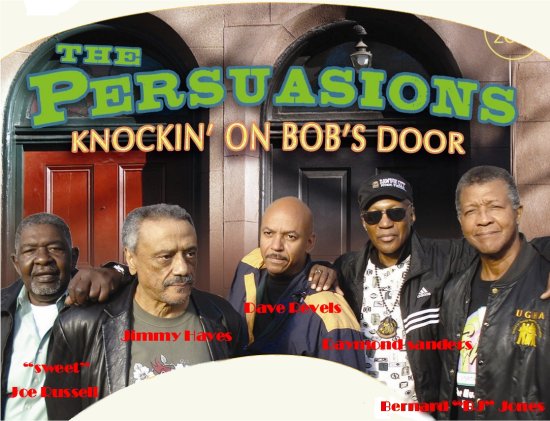 Formed in 1962, the Persuasions have performed with a legendary line up of artists from Joni Mitchell, Stevie Wonder, Paul Simon, Ray Charles, Liza Minelli, the Grateful Dead, and amassed over 28 album and CD record releases. Known for their creative interpretation of iconic artists, the Persuasions have recorded a wide range of music from Frank Zappa, the Grateful Dead, the Beatles, U2, Motown and many more. The Persuasion hae also appeared in films, including their documentary “Spread the Word,” which was shown on PBS and Spike Lee’s “Do it Acappella.” which featured the group.

Over the years, The Persuasions have opened for Frank Zappa and The Mothers of Invention, Ray Charles, Bill Cosby, and Richard Pryor to name but a few. Interestingly, it should be noted that acts such as Roseanne Barr and Bruce Springsteen once opened for The Persuasions.

The Persuasions moved from street corners to parties to “performances” during the 1960’s. They worked with Robert F. Kennedy in Project Restoration and actively participated in many other programs and initiatives designed to aid African-Americans living in the inner cities of America.

Legendary musician Frank Zappa and his wife Gail discovered The Persuasions (In a commercial sense) in 1968. At the urging and encouragement of a good friend of the Persuasions, David Dashev (who eventually became the groups producer and manager), Zappa listened to a tape of The Persuasions. Shortly after listening to the tape, Frank and Gail Zappa signed the group to their label. The Persuasions debut album “Straight” was a mix of studio and live recordings released during the fall of 1970.

After the Straight album, the Persuasions signed with Capitol Records and have since gone on to release a string of commercially successful and critically acclaimed recordings. The Persuasions have released albums and CD with labels such as MCA, A&M Records, Elektra Records, Flying Fish, Rounder and Rounder/ Bullseye Blues, Music For Little People, (Earthbeat!/Rhino), Grateful Dead Records/ Arista and Chesky Records. You can peruse The Persuasions discography at this link.

The sound and soul of The Persuasions are always evolving. All the original Persuasions have a strong history and deep background in church based music. Their singing, style and musical inventory has always included the heavy influence of gospel, a major measure soul, and a dose of pop.

They are the acknowledged Kings of Acapella.