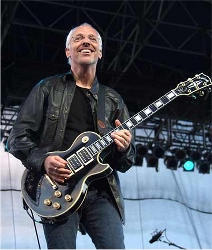 Born in Beckenham, England, Peter became interested in music at age 7, mastering the guitar by age 10 and playing in a band called The Little Ravens, which played on the same bill at school as George & The Dragons, a group including David Bowie, then a student of Peter’s art teacher and dad, Owen Frampton.

By 16, Peter had been recruited to be the lead guitarist and singer in The Herd, scoring a handful of British teenybopper hits. Named “The Face 0f 1968” by the UK press, Peter was well on his way.

By 1969, 19 year old Peter formed Humble Pie with ex-Small Faces singer and guitarist Steve Marriott. Five albums later, he left Humble Pie to go solo in 1971, just in time to see Rockin’ The Fillmore chase up the US charts. He spent the next 5 years writing, recording and touring. Signed to A&M, he began building a solid fan base with his first 3 albums Wind Of Change (1971), Frampton’s Camel (1973) and Somethin’s Happening(1974).

In 1975, the release of Frampton gave the world a taste of what was to come. The album went to #32 in the US charts and went gold. This was followed up in 1976 with the very successful live album, Frampton Comes Alive!, recorded at San Francisco’s famed Winterland. The resulting publicity and multi-million dollar grossing tour made Peter Frampton an international superstar and launched 3 hit singles, ‘Do You Feel Like We Do?’, ‘Baby I Love Your Way’ and ‘Show Me The Way’ that exemplify the best of ’70s rock, and remain radio play fixtures. In 1976, Frampton was named Rolling Stone Magazine’s ‘Artist of the Year’ and received innumerable industry plaudits for album and concert sales.

Peter released I’m In You in 1977, seeing the album and same titled single reach platinum and #1 respectively and in 1978, he appeared in the movie version of The Beatles’ Sgt. Pepper’s Lonely Hearts Club Band,alongside The Bee Gees, in the role of Billy Shears.

After recuperating from a near fatal car crash in 1978, Peter released the album Where I Should Be in 1979, which went gold and produced the hit‘I Can’t Stand It No More’. Peter continued to release albums on a semi-annual basis throughout the 80s and in 1987, was invited by David Bowie to play lead guitar on the latter’s Glass Spider World Tour. After the tour, Peter moved to Los Angeles and started writing and recording at home. These songs became the the basis for 1989’s When All The Pieces Fitalbum.

The new millenium found Peter involved in a wide array of projects, among them – working with Gibson Guitar to create the Peter Frampton Signature Les Paul Guitar; starting his own company, Framptone, to create and build high-end handmade accessories for musicians; recording 2 songs for Walt Disney Recoreds’ Tigger Mania.  He released his first live DVD, ‘Live in Detroit’, recorded at the Pine Knob Music Theatre in the summer of 1999 – the first concert DVD to be released in High Definition TV format and 5.1 surround sound. Released on both VHS and CD, it featured 2 new songs as well as several of his greatest hits. His performance of ‘Off The Hook’ was nominated for a Grammy Award for Best Rock Instrumental Performance in 2001. He toured nationwide and appeared on many televisions shows, and VH1 premiered ‘Peter Frampton: Behind the Music’.

Peter also returned to the big screen in Cameron Crowe’s semi autobiographical movie ‘Almost Famous’. Peter’s role in the film as  road manager for Humble Pie was a small part of his total contribution. His role as ‘authenticity advisor’ played an even more important part. Peter helped Billy Crudup learn to play guitar. He gave Billy and Jason Lee invaluable insight into performing so they could really act like rock stars of that time. A favorite memory is that Billy Crudup, who had never picked up a guitar before, now plays everyday. Peter made sure the equipment seen on stage was actual 70s gear and, of course, wrote music for the film.

Other notable highlights are the premier of A&E’s Biography: Peter Frampton an informative and in-depth spotlight on his life and career and TV appearances on shows such as Family Guy and The Drew Carey Show; as well as many benefit concerts for many worthy causes.

Peter’s show is not one you want to miss. As one reviewer has said: “Frampton’s sound is a timeless one …”