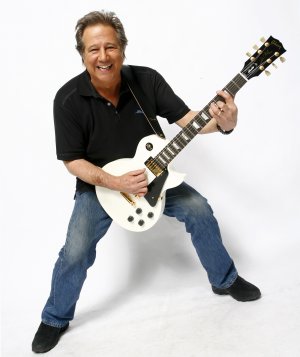 Greg Kihn left his hometown of Baltimore in 1971, where he learned how to play guitar.  On the streets of Berkeley, California, he had dreams of making his fortune in the Golden Street. While playing for spare change on Telegraph Avenue, he started a band with his life-long musical partner Steve Wright. Soon they joined up with Beserkley Records and started cranking out albums.

In 1976, after his debut on the compilation Beserkley Chartbusters, he recorded his first album with his own band consisting of Ronnie Dunbar (guitar), Steve Wright (bass), and Larry Lynch (drums).  After several albums and constant touring, Kihn scored his first hit, 1981’s Top 10 “The Breakup Song (They Don’t Write ‘Em)” from the Rockihnroll album.

“Jeopardy” later served as the basis for a parody (I Lost on Jeopardy) by “Weird Al” Yankovic.

Kihn kept a relatively low profile throughout the ’90s, releasing Mutiny in 1994 and Horror Show in 1996. All the Right Reasons followed in mid-2000.

Greg Kihn also became an author and has written a number of horror novels.  His most recent project is the release of his latest book, “Carved in Rock”, a collection of short stories written by musicians such as Ray Manzarek (The Doors), Pete Townsend (The Who) and Joan Jett.

He also plays with his band, sometimes accompanied by his son, Ry, who was, (prophetically, it seems) named after Ry Cooder.  Ry is an accomplished guitarist with his own band, K2, as well.

Greg enjoys an immense loyal fan base from his music days, which continues to grow through the many activities he continues to pursue.  By weaving his wealth of rock knowledge, relationships with the Who’s Who of rock stars, his own personal rocker experiences, and his genuinely lovable personality into his every endeavor, Greg is one of the few classic rockers to have found success on and off the rock stage.