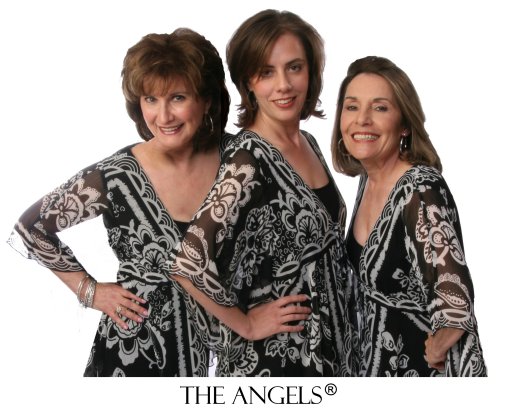 The Angels® is one of rock and roll’s favorite girl groups, known world-wide for their smash hit record, “My Boyfriend’s Back,” and are currently portrayed in the Broadway smash hit “Jersey Boys.”

Two “Jersey” girls founded the group that came to be known as the Angels®: Barbara (Bibs) Allbut Brown and sister, Jiggs Allbut Sirico, formed the group in 1961. They recorded two chart hits “‘Til” and “Cry Baby Cry” with Linda Jansen on lead. Linda left to be a solo artist and in 1963, another Jersey girl, Peggy Santiglia Davison, came on board. Peggy sang lead and it is her voice that you hear beginning the famous lines: “He went away and you came around and bothered me every night.”

Songwriter/producer Bob Feldman was a staff writer for April-Blackwood Music. When, in 1963, he heard that the Sweet Shoppe, across the street from his old high school in Brooklyn, was being torn down, he went back for one last look. “While I was there”, Feldman recalled, “an altercation started between a young girl and a hoody looking young man with a leather jacket. She was pointing a finger at him and screaming “My boyfriend’s back and you’re gonna be in trouble. You’ve been spreading lies about me all over school and when he gets a hold of you, you’re gonna be sorry you were ever born.” That night Bob told his writing partners, Jerry Goldstein and Richard Gottehrer, about the incident and they sat down and wrote the soon-to-be classic hit song about it.

The popular group also charted with “I Adore Him” and popular concert closer “Thank You and Goodnight.” Their album credits include “My Boyfriend’s Back” and “A Halo to You.”  The group recently released a beautifully written and arranged reunion CD titled “Love, The Angels®.”

These Jersey girls worked with everybody who was anyone in the 1960s and also provided backup vocals for such popular artists as Neil Diamond, Frankie Valli of the Four Seasons, Lou Christie and many others. Peggy Santiglia Davison co-wrote the Four Seasons #11 Hit “Beggin” which has enjoyed new popularity in the new millenium, with a remix by French DJ Pilooski and a cover by Madcon that turned up in a Nike commercial, much to the group’s delight.