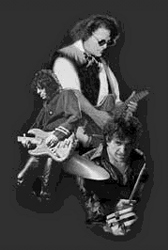 Mountain is one of those rare bands in the past thirty years that can be credited with forging a style and sound that would for ever change the face of Rock Music.The innovative studio and live music of Leslie West, Felix Pappalardi, Corky Laing and Steve Knight, MOUNTAIN, is one of those elite examples. The combination of Leslie’s unique tone and feel, Felix’s studio production skills, Corky’s powerful double bass drumming and Steve’s keyboard textures, produced some of the best and memorable rock tunes ever,“Mississippi Queen”, “Nantucket Sleighride”, “Theme From an Imaginary Western”, “Yasgur’s Farm”, “Never In My Life”, “Blood of the Sun”, “Dreams of Milk” and “Honey”, all stand the test of time and are forever etched in rock history. These songs came from the classic rock albums, Leslie West – Mountain, Mountain-Climbing! and Nantucket Sleighride.

Mountain was born out of the 60s music explosion. Leslie came from The Vagrants, an East Coast power house band that was making a name for themselves. Corky came from the band Energy that was produced by Felix Pappalardi. Felix had extensive producing credits before Mountain formed in 1969. He was a classically trained musician who studied conducting and music arranging in college. His skills eventually lead him to Mountain. He produced Cream’s Disreali Gears and Leslie’s first album including many other prominent artists. Steve Knight was brought in my Felix because of prior musical affiliations. Eventually this small web of the music scene brought these four guys together. They debuted at the Fillmore in 1969 and went on to play at the granddaddy of all music festivals Woodstock. They established themselves as one of the premiere rock bands of their time.

Mountain is one of those magical music collaborations that can’t be duplicated. Just like Cream, the Beatles, Led Zepplin, The Who, The Jimi Hendrix Experience, The Rolling Stones, or any great band – it’s a once in a lifetime twist of fate that brings individuals together to make their mark on history of music. In their short musical life they produced 3 gold albums and created one of the most recognized rock tunes “Mississippi Queen”. The most enduring legacy any band can hope to achieve is to have others generations of musicians aspire to copy them. Leslie West’s guitar playing did that for many guitarists. He had that rare gift to have his own tone and touch that helped define the Mountain sound. Whether you love or hate them, you can’t deny them their place in rock music.

Mountain received the LISA award for lifetime achievement and were inducted into The Long Island Music Hall of Fame in 2004.  They celebrated their 35th Anniversary in 2005. In 2006, Leslie West, Corky Laing, and Richie Scarlet continue to prove rock lives with active tour dates and sold out shows.