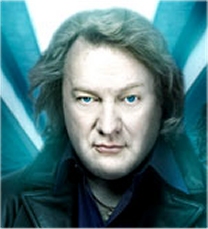 Powerhouse vocalist and songwriter Lou Gramm can be heard each and every day, all over the world, on Radio, iPods, CD players, television commercials, music videos, and of course… jukeboxes. He has become the voice of a generation.

Among the most distinctive and powerful voices to emerge from Rock and Top 40 radio, Gramm – the lead vocalist and co-writer of the multi-platinum band Foreigner – as well as a successful solo artist in his own right – remains one of the most recognizable performers in music today.

Lou Gramm, the vocalist on 20 Top 40 singles, which continue to drive sales of nearly 80 million albums worldwide, exploded onto the international music scene with Foreigner on the chart topper, “Feels Like The First Time”, in 1977. The stats are impressive – Eight Top 5 singles on the Billboard Hot 100 chart and Five Top 5 Albums on the Billboard Top Album chart in the U.S alone! Lou Gramm is in a class by himself.

Now, nearly three decades after the debut of Foreigner and chart-topping success as a solo artist, Lou Gramm returns with a hot new band and a dynamic live show featuring 90 minutes of his own unique brand of Rock’n’Roll.

“I was the lead vocalist for Foreigner for 26 years,” says Gramm. ”I am enormously proud of this, and the music I have made with Foreigner is still a big part of my solo shows. However, with this line up, I can also perform my own music and the hit records I have had as a solo artist. I even throw a few curve balls, such as my take on a Beatles classic like ‘You Can’t Do That.’ In the end, I believe the fans are getting a better show.”

Whether they are rocking out on classics like “Hot Blooded” or “Juke Box Hero”, or rolling out a new extended groove on Gramm’s massive solo hit, “Midnight Blue”, Lou and his band have been pleasing enthusiastic audiences since January of 2004 with a show that captures the essence of Gramm’s talent.

“It is enormously gratifying when I speak with fans before and after these shows,” says Gramm. “So many of them tell me how the music I have made since the mid-1970s has been so important in their lives. For some, it was a rebellious youth that identified with Foreigner rockers like ‘Dirty White Boy’; for others it was that flashback to their first true love that they envision when they hear a song like ‘Waiting For A Girl Like You’. I am just grateful that something I helped create could touch people so deeply.”

As of 2012, Gramm has been performing with his band that features A.D. Zimmer on bass and guitar, Ben Gramm on drums,  Michael Staertow on lead guitar and keyboardist Andy Knoll.