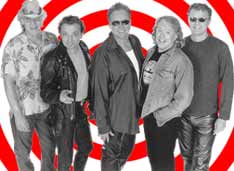 In 1980, Loverboy introduced themselves to the world with their self-titled debut album. They quickly became one of America’s and MTV’s most popular rock bands. From 1980 through 1987 Loverboy garnered 4 multi-Platinum albums and numerous international Gold albums. Their tours sold out arenas and stadiums nationwide. Their hit singles came one after another, and went on to become the anthems and party songs of an entire generation of rock concert going fans. Loverboy’s red leather pants, bandannas, and big rock sound defined the band’s trademark image and high-energy live show.

Loverboy’s inception began in Calgary, Canada, when Mike Reno was introduced to Paul Dean at The Refinery Night Club. Dean was rehearsing a new band out back in a warehouse with a friend of Reno’s and Mike stopped by to jam. Dean heard him sing a couple of songs and that was that!  Over the next few weeks, Dean and Reno began writing songs on guitar and drums. Doug Johnson (at the time in another Canadian band) began to jam with them. During one of those jam sessions with Reno on drums and Dean on bass, Turn Me Loose and Loverboy was born.

After being rejected by all the major U.S. record companies, Loverboy signed with Columbia Records Canada. On March the 20th, 1980, Loverboy went into the studio with producer Bruce Fairbairn and engineer Bob Rock to record their self-titled debut album — Loverboy. That summer, the record flew out of the stores setting record sales for a debut album – over 700,000 in Canada alone. Columbia U.S. had no choice but recognize that 700,000 people could not be wrong. The U.S. released the album in November 1980 and by April 1981, it had gone GOLD. Loverboy’s debut album soldl more than 2 million albums in the U.S. and 4 million worldwide.

Soon the band found themselves playing on mega tours with Journey, Bob Seger, Cheap Trick, ZZ Top, Kansas and Def Leppard, to name a few; they quickly became MTV darlings, being one of the first bands ever featured on the music channel.

Between dates,( over 200 shows in 1981) the band wrote and recorded their second multi-platinum selling album. In 1981, Get Lucky was released. It featured such songs as Working For The Weekend, When It’s Over, Take Me To The Top, Only The Lucky Ones, Jump, etc. This led to an unprecedented six Juno Awards, Canada’s highest music award. This record still stands today.

In 1983, Loverboy released their 3rd album Keep It Up. With Hot Girls In Love and Queen Of The Broken Hearts burning up the airwaves they were soon recognized as one of the hardest working bands with a must-see live show.

Lovin’ Every Minute Of It, the band’s 4th album it hit the airwaves, and landed them as one of the Top Five grossing touring acts, performing in over 100 cities across the U.S. and Canada. They became the 1st Canadian group to earn Columbia Records’ exclusive Crystal Glove Award, celebrating the sale of over 5 million albums outside their native country.

In 1986 Loverboy recorded Heaven In Your Eyes, for the upcoming blockbuster movie, TOP GUN. The single went Top 5 on Billboard’s chart. This was followed by the 1987 release of Wildslide — Loverboy’s last studio album of the 80s.

After 9 years of being ruled by Loverboy’s agenda of recording, touring, television appearances, videos, and hoards of interviews Paul, Mike, Matt, Doug and Scott decided to take a rest from the band and each other. The year was 1989.

Reuniting in late 1992, Loverboy joined Bryan Adams, Bon Jovi and other stars to help raise money for cancer-stricken friend and fellow recording artist Brian ‘Too Loud’ McLeod. Unrehearsed, with 3 years since their last performance, the band hit the stage running. The crowd loved what they saw and were reminded of why Loverboy was such a great live band. Mike, Matt, Doug, Scott and Paul felt they this was the most fun they had had in years. They wanted to do it again.  They got into their own cars and drove around Western Canada doing selected dates. They were back doing what they loved — performing live.

In 1993 the band decided to go back to the U.S. with some trepidation – Loverboy did 64 concert dates. There was no reason to be nervous. The fans came back out and brought new ones with them. Sony/Legacy released a new greatest hits album entitled, Loverboy–Classics. Since then, the band had continued touring every year,  doing shows with old friends such as Foreigner, REO Speedwagon, Cheap Trick, Night Ranger, Eddie Money. In 1998 they performed over 95 concerts in the U.S. alone. In the U.S. in 1998,  Loverboy–Classics went GOLD.

Buoyed by this latest achievement, their management and Sony/Legacy started to exchange ideas on a live album. Live recordings had to be relocated and carefully handled because most of the live concert recordings had being lying dormant for over 15 years. Members of the band worked with Sony Producer, Al Quaglieri to refurbish the recordings. After 2 years of hard work, in the summer of 2001, Sony/Legacy released the first ever live greatest hit’s CD from the intense touring years of 1982–1986 titled Live, Loud & Loose, a collection of live recordings captured on tape from some of their most exciting concerts. The CD contains 14 previously unreleased live concert recordings featuring Loverboy’s mega hits, including Lady Of The 80’s, Take Me To The Top, This Could Be The Night, Dangerous, Lead A Double Life, When It’s Over and The Kid Is Hot Tonite.  In conjunction with the release of Live, Loud & Loose, Loverboy toured the US and Canada. The tour was dedicated to the memory of their friend and late bassist Scott Smith, who was declared lost at sea on November 30th 2000. With the CD also dedicated to Scott, it serves as a special memory to a band that has been together since 1980.

Loverboy celebrated 25 years together in 2005. They continue to delight their fans and make new ones everywhere they appear.