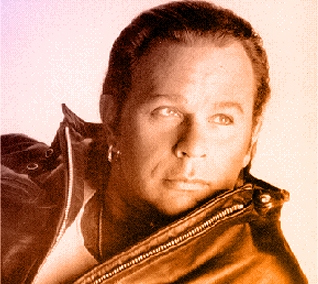 The falsetto of Lou Christie soared across the country in 1966 his multi-million selling LIGHTNING STRIKES rocketed to Number One. Twenty years later, LIGHTNING STRIKES remains a staple of Classic rock stations and is covered by new artists with alarming frequency.

Lou first struck the charts at the age of 19 with the 1962 million-seller, THE GYPSY CRIED, on Roulette Records.

This was followed quickly with another Roulette million-seller, TWO FACES HAVE I (with a lyric later heard on Bruce Springsteen’s Tunnel of Love album). These two smashes earned him an invitation to join Dick Clark’s “Caravan of Stars,” which toured the United States extensively.

Even in the face of the British Invasion of the American pop charts, Lou came across with two more big hits during that period, HOW MANY TEARDROPS in 1964 and YOU AND I, and was even cited by John Lennon as “one of the people who influenced me and the rest of the Beatles… truly an original and creative person.”

LIGHTNING STRIKES came next, zooming to Number 1 in 1966 and guaranteeing Lou a place in pop history. Lou became known as “Lightning Lou” and later in 1966, he followed up with RHAPSODY IN THE RAIN, PAINTER, OUTSIDE THE GATES OF HEAVEN, BIG TIME and I’M GONNA MAKE YOU MINE, a 1968 smash hit.

Lou’s fans included England’s Royal Family; In 1970 and again 1972 Lou Christie gave Royal Command Performances which were attended by The Queen of England, Princess Margaret, Lord Snowden, and other notables.

Today, Lou tours extensively, appearing in concert halls, sports venues and at corporate functions. His new album BEYOND THE BLUE HORIZON, was released in late 1 994 on the Varese Sarabande label (distributed by MCA Records). The album futures new material from the Nineties as well as previously released versions of some of his hits. Lou sung three of his compositions in the 1994 movie BARCELONA. His poignant recording of BEYOND THE BLUE HORIZON his been featured in several movies, including RAIN MAN, A HOME OF THEIR OWN, and DUTCH. He recorded a duet of SINCE I DON’T HAVE YOU with Leslie Gore for Manhattan Records and recently appeared on ENTERTAINMENT TONIGHT, NASHVILLE NOW, SHOWTIME’S CLASSIC ROCK ‘N ROLL REUNION, NEW YORK AT NIGHT, and THE JACKIE MASON SHOW.

Lightning struck in 1966, it’s striking again today, and if Lou Christie’s fans have anything to say about it, it’ll continue to strike for a long time to come.