Joey Molland is a survivor and, when he looks back on how what started out as a rock and roll fantasy and then turned into a bona fide nightmare, he tries to remain upbeat. He concedes that the story was tragic but prefers to focus on the good times: “I had a great time. I was very happy with the band and what we were doing. It was a bit of an ideal situation for a guy like myself, in his early 20s.”

Molland was one of three primary songwriters in Badfinger, revered by critics as one of the outstanding melodic pop bands of all time, proteges to the Beatles and the darlings of Apple Records. In the late 1960s, Badfinger stormed world pop charts with hits such as “Come and Get It”, “No Matter What”, “Day After Day” and“Baby Blue”.

After this very promising start, however, devious business dealings and litigation left the four members of the group left virtually penniless. Things did not get better, they got worse. Key songwriter Pete Ham committed suicide by hanging in 1975. Bassist Tom Evans did the same thing eight years later. 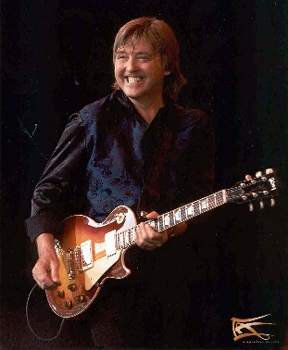 Since Badfinger’s golden era, which included headlining at Carnegie Hall and rubbing shoulders with the Beatles, Joey Molland has found himself broke at various times and working menial jobs in order to survive.

“Thank God I had guitars and I was able to sell some of that stuff,” he said. “We were flat broke, and that’s happened to me three times, where my wife and I have had to sell off everything and go and stay with her parents or do whatever. I installed carpeting for a while in Los Angeles and stuff like that. You do what you’ve got to do to survive.”  And he has survived.  He has also spoken out in the hope of helping upcoming musicians to avoid some of the pitfalls that he learned about the hard way.

Things began to pick up after a London court settlement in 1985 in which the two surviving members and the two estates agreed to patch up their differences over royalties. Badfinger’s six albums continue to sell well around the world.

Since then Molland has revived his career as a solo artist, record producer and leader of “Joey Molland’s Badfinger”. His 2001 CD “This Way Up” (Independent Artist) was very favorably received, in particular, “Isn’t it a Dream”. The trio plays up to 80 concerts a year. Joey says, “About 50 percent of the show is the old Badfinger stuff and then the rest of it is divided between my solo records and new songs that we’re working on now.”

“COME AND GET IT”