“Well, meet me, baby, down on 45th Street” … is a line that was synonymous with The Peppermint Lounge in 1961 when Joey Dee and The Starliters were rocking the house with their smash hit, “The Peppermint Twist”, and shot to fame on the charts.

It all started when one weekend, a New Jersey act, Joey Dee & The Starliters, were booked to play at the then obscure Peppermint Lounge on West 45th Street in New York City, actress Merle Oberon and Prince Serge Oblinski came and danced the night away at the Peppermint Lounge. When this was reported the next morning by columnists Earl Wilson and Cholly Knickerbocker, it took barricades and mounted police to keep the crowds in line, which had backed up to Broadway, the next night! Celebrity visitors continued to pour into the Peppermint Lounge, including Judy Garland, John Wayne, Jackie “Ted Kennedy, Nat “King” Cole, Shirley MacLaine, Tennessee Williams, Truman Capote and Liberace, to name only a few!

Joey Dee and The Starliters became the house band and wrote the tune that would extend the Twist craze for another 6 months.

Actually, Joey Dee played alto sax back then and mostly did background vocals. Dave Brigati and Roger Freeman were the two lead singers. When Dave Brigati couldn’t get the exact feel that the producer Henry Glover wanted on Peppermint Twist, another version with Joey doing the lead was made and Henry decided that Joey had the version he was looking for. Joey has said “I just had a good feel for certain songs and I still feel that same way, that certain, particular songs, I can sing better than anybody else.”

Back in the early 60s, The Ronettes were part of Joey’s revue and 3 of the 4 Young Rascals were also part of that group. After Joey’s original group disbanded, he invited Felix Cavaliere to be a Starlighter. Gene Cornish was disenchanted with his group when Joey invited him and he also got original member, Dave Brigati’s brother, Eddie, to join.

At one point in the mid 60s, Joey even hired Jimi Hendrix as his guitarist. Jimi had just gotten off the road with Little Richard and auditioned for Joey in his garage in Lodi, New Jersey. Joey says “After the first 5 minutes I knew he was the guy for my band. … He was a wonderful team player, a fine guitarist, similar to Curtis Mayfield. He wasn’t experimenting with the guitar sounds and the feedback when he was with Joey Dee and the Starliters. That came slightly later. He was a wonderful human being and it was a tremendous loss when he died, to the rock and roll community. …”

Now joined by original member, Dave Brigati, and singer, Bobby Valli (Frankie Valli’s brother), Joey Dee and the Starliters continue to tour all over the US and Canada. 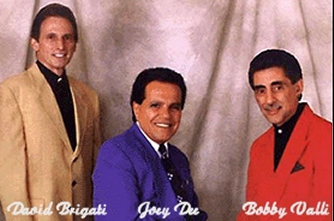 Joey is a master showman whose other hits include: Shout, Hot Pastrami/Mashed Potatoes and What Kind of Love Is This.

Dave Brigati, often called the 5th Rascal, sang and arranged the vocals on such Rascal classics as Good Lovin’, Groovin’ and Lonely Too Long, to name a few.

Bobby Valli hauntingly recreates hits from Frankie Valli and the Four Seasons including Walk Like A Man, Can’t Take My Eyes Off You and Oh, What a Night.