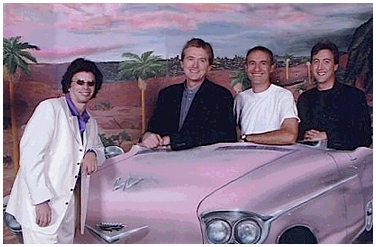 Edison Lighthouse originated in England as an outgrowth of the successful group, The Flying Machine which had a US top 5 hit in November 1969 with “Smile A Little Smile For Me” featuring Les Fradkin on vocals, mellotron, organ and guitar. The producer of that smash hit assembled a new group for a new song called “Love Grows (Where My Rosemary Goes)”.

Les Fradkin returned from New York City to join this newly formed British group as an original member of Edison Lighthouse. The recording of “Love Grows” proved to be a worldwide success reaching the # 5 chart position in the USA on the Billboard singles hot 100 chart in February 1970 and became a # 1 hit the world over selling a total of 8 million copies. In fact, for the entire year of 1970, it was the #2 selling pop record in the U.K.

The formula “feel-good music” hit sound created with that smash proved to be so successful that the Edison crew recorded other material under other group names which duplicated the sensation of their first hit together.

As White Plains, their single of “My Baby Loves Lovin'” reached # 13 in the US and # 9 in the UK. Under the moniker of “The Brotherhood Of Man”, their “United We Stand” reached #13 in the US and # 1 in Enland in 1970. In fact, all these records (“Love Grows”, “My Baby Loves Lovin'” and “United We Stand”) charted between January and May of 1970 prompting a mention in the Guinness Book of World Records for most singles charted simultaneously under different group names containing the same artists.

In addition to these lasting accomplishments, the group also recorded two other hits “She Works In A Woman’s Way” and “It’s Up To You Petula” which both charted top 5 in Japan and top 60 the US in 1971 under the Edison Lighthouse name.

Les’ exciting Edison Lighthouse show features 20 “one-hit wonder” hits that Les has performed on including “Love Grows”, “My Baby Loves Lovin'” and “Smile A Little Smile”, plus new material from the brand new Edison Lighthouse CD “The Soundtrack Of Your Youth”.