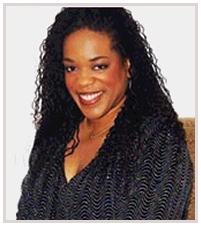 “It’s always been important for me to tune in with what’s going on in music” Evelyn says. She enjoys going to clubs and concerts and being with people who enjoy all types of music. “You have to live a little and explore a lot” the vocalist states.

Evelyn always seems to dazzle the audience with her vibrant personality, as well as her strong seductive voice. Her electric performances accentuate her remarkable vocal ability as she delivers songs ranging from smooth ballads to party jumping, funk knocking jams.

Born in the Bronx, New York in 1960, Evelyn had a showbiz lineage. Her uncle, Avon Long, was an actor, singer and dancer who first played Sportin’ Life in the play Porgy and Bess and later starred in the ’70s play Bubblin’ Brown Sugar. Her father, Erik King, was a singer and often augmented groups that appeared at New York’s Apollo Theater. By her teens, King had relocated to Philadelphia with her mother, and began singing in several groups. To make ends meet, King and her mother became cleaning women. For a teenager, King’s voice was quite mature; many at first thought she was a grown woman. While working at Gamble & Huff’s recording studio, she was “discovered” by producer T. Life, and went on to become one of the most popular R&B and disco singers of the late seventies and early eighties.

On September 20, 2004, Evelyn’s signature song “Shame” became among the first records to be inducted into the newly formed Dance Music Hall of Fame at a ceremony held in New York’s Spirit club.

Evelyn continues to perform onstage frequently. She is right at home in a club atmosphere encouraging the audience to sing along and dance to her old hits and new songs.