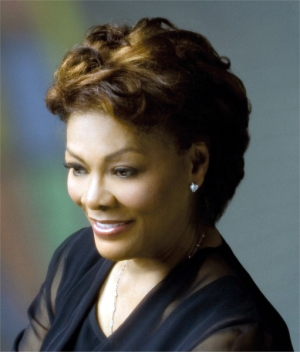 Billboard magazine notes that with no less than 55 hit singles, which include “Don’t Make Me Over”, “Anyone Who Had A Heart”, “I Say A Little Prayer”. “Do You Know The Way To San Jose”, “I’ll Never Fall In Love Again”, among many other classics, the legendary Dionne Warwick is the second most charted female of the past 40 years. As the voice behind a decade of classic tunes written with her in mind by the famed team of Burt Bacharach and Hal David, Dionne established herself as an international superstar in the 60s and through an incredible body of recorded work that now stretches to over 40 albums, the golden lady with the recognizable voice has continued to thrill audiences from Rome to Rio, London to Los Angeles and from New York to Nairobi.

Dionne’s association with Bacharach & David began in 1962. In all, they racked up 30 hit singles and close to 20 best-selling albums during their first decade of gold. Dionne’s music transcended race, culture and musical boundaries with a soulful blend of pop, gospel, and R&B. By making her 1963 debut performance, where she was  introduced by the legendary Marlene Dietrich at The Olympia Theater in Paris, Dionne also became the first black female pop and soul singer to achieve international stardom. She was also the first black female performer to appear before the Queen of England at the Royal Command Performance in 1968, and since that time, Dionne has performed before numerous kings, queens, presidents, and heads of state all over the world.

Her recordings of tunes like “A House is Not a Home” “Alfie”, “Theme from Valley of the Dolls” and “The April Fools” also made Dionne Warwick a pioneer as one of the first female artists to popularize classic movie themes. And as all diehard Warwick fans know, Dionne made her own film debut in 1968 in the movie “Slaves”, making her the first contemporary black female recording artist to do so, once again following the footsteps of one of her she-roes, the inimitable Lena Home.

Through out the 80’s, Dionne collaborated with many of her musical peers including Johnny Mathis Mathis, Smokey Robinson, Luther Vandros and others. Working with Stevie Wonder, Dionne was the music coordinator for the film and Academy Award winning soundtrack album “The Women in Red”. She was one of the key participants in the all-star charity single “We are the World” and performed at “Live Aid” in 1984.

In 1985, Dionne reunited with producer Burt Bacharach and teamed up with longtime friends Gladys Knight, Stevie Wonder, and Elton John to record “That’s What Friends are For” with proceeds from the LP sales being donated to the American Foundation for Aids Research (AmFar). In 1990, she joined forces with a number of her Arista label mates to raise over $2.5 Million for various Aids organizations at the star-studded Arista Records 15 Year Anniversary Celebration “That’s What Friends Are For” benefit at New York’s Radio City Music Hall.

As a women who has inspired and empowered millions through her music, performances, and work as a humanitarian, nothing seems impossible for Dionne. With a warm smile, she reflects that she’s always remembered the words of wisdom imparted by her grandfather who told her many years ago, “If you can think it, you can do it”! With a life filled with accomplishment and achievement, Dionne Warwick can proudly say she has and will continue to adhere this wisdom.