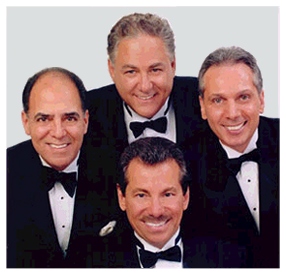 Known all over world over for their romantic interpretations of some of the most beautiful love songs ever written, The Duprees have made a career out of giving new life to old hits.

If you take the 1940s Glenn Miller arrangements along with the tunes of Joni James, Frank Sinatra, Jo Stafford, Nat King Cole, (just to name a few) and put them together, you have the sound of The Duprees.

Starting out in the early 60, in Jersey City, New Jersey, The Duprees were formed by Mike Arnone. They were discovered by George Paxton, the president of Coed Records and former big band leader from the 1940’s. Impressed with The Duprees’ smooth vocal quality, he had them record a 1950s Jo Stafford ballad “You Belong To Me” with Big Band arrangements. It was an instant national hit and the group’s first Million Seller. The unmistakable sound was born and the group did not rest on its laurels, but followed their classic version of “You Belong To Me” with another gem, “My Own True Love”.  both songs 1962.

In 1987 the group celebrated their 25th year in the recording business with a Silver Anniversary Album containing 25 of the most requested songs (one for each year).

In 1994, at the request of their die-hard fans, The Duprees released a long-awaited Christmas album titled “A Duprees Christmas” featuring some of the greatest Christmas songs ever recorded.

The Duprees celebrated 35 years in show business in 1997. Their journey continues with their latest album release titled “Till The End Of Time”. This new CD is a collection of songs with new and exciting arrangements of old standards combined with some original selections.

With their unique sound and outstanding vocal harmonies, The Duprees are still entertaining audiences in major venues throughout the world; appearing with some of the biggest names in show business.

Although there have been changes over the years, the group is still intact and still performing to standing ovations at each performance.