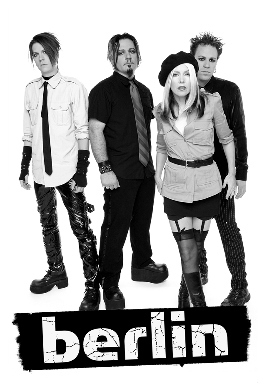 Berlin has had a extremely interesting history. And after 20 years off and on they are still performing.

Formed in the Summer of 1979, Berlin jumped on the new wave techno pop bandwagon that was starting to permeate the music scene.

The initial line up featured Terri Nunn as vocalist, John Crawford on the bass guitar), and David Diamond on keyboards. Other members of the band included Rick Olsen on guitar, Matt Reid on keyboards, and Rob Brill on the drums.

The group recorded a single for Renegade Records. The single featured “Matter Of Time” and “Overload”. Soon after its release Terri Nunn left to pursue her acting career. She was replaced very briefly by a very young Toni Childs.  Less than a month later, Virginia Macolino became lead vocalist. At this time they put out an album on their own label (Zone H Records) and were signed to I.R.S. Records in 1980. They put out one single for I.R.S., which was a reworked version of “Matter Of Time” with an instrumental, “French Reggae” on the B-side. In early 1981, they disbanded.

A few months later, Terri Nunn returned to the line-up and they began to work on what ultimately would gain them a LOT of attention: an EP for (now defunct) Enigma Records which featured the controversial “Sex, I’m a…” and a popular MTV staple, “The Metro”.

During the recording and supporting tour that ensued, the band line up underwent  drastic change. Ultimately only Terri Nunn and John Crawford remained from the original Berlin.

Nevertheless, their popularity continued to grow and the best was yet to come.  They signed with Geffen Records and performed the quintessential 80’s love song for the Tom Cruise Film TOP GUN, “Take My Breath Away”.  Produced by disco diva Donna Summer and europop production wizard Giorgio Moroder. The song became a No.1 on Billboard’s Hot 100 chart in September 1986 and won the Academy Award for Best Song as well as the Golden Globe Award for Best Original Song in 1987. The music video showed Terri Nunn in a flowing dress walking between jet planes in a shadowed hangar, intermingled with some images from the movie.

Berlin’s current lineup features Terri Nunn on vocals, Carlton Bost, guitar; Mitchell Sigman on keyboards; and Chris Olivas on the drums.  They are continuing to tour in the year 2006 to the delight of their legions of fans.