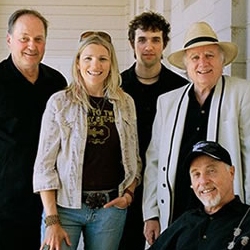 Evolving out of the San Francisco rock scene of the mid-1960s, Big Brother was in the forefront of the psychedelic music movement.

The band was formed by Peter Albin, Sam Andrew, James Gurley and Chuck Jones in San Francisco, in the Haight Ashbury section. Originally called the Blue Yard Hill, with various members floating in and out, Big Brother became a reality in September of that year. The name was selected by legendary concert promoter Chet Helms from a list of names that the band was reviewing for consideration. “Big Brother” was near the top of the list and “The Holding Company” close to the bottom; with a decision to combine the two, Big Brother and the Holding Company was born.

Their first official gig took place in January 1966 at the Open Theater in Berkeley. Within a short time they became the house band for Chet Helms at the Avalon Ballroom and began to develop a loyal following of fans. The band had what Sam Andrew described as a “progressive-regressive hurricane blues style” in the early days. Highlights of their early performances included “Coo Coo”, “That’s How Strong My Love Is” and “Hall Of The Mountain King” usually relying on Peter Albin for lead vocals. Later, Peter would also sing the lead on the early versions of “Down On Me”, and “Summertime”.

In 1966, Chuck Jones left the band and was replaced by Dave Getz. Another change that year was the addition of a female lead singer, Chet Helms suggested Janis Joplin.  The band became aware of her shortly after she came to San Francisco; Peter and James heard her in coffeehouses. On Chet’s urging Janis auditioned for the band at their rehearsal hall in an old firehouse and she was invited to join the band. Janis debuted with Big Brother on June 10, 1966, at the Avalon Ballroom. The majority of Big Brother fans approved of the addition, and Janis became an instant hit.

When Janis joined, the musical direction of the band began to change. In the early days they regularly launched into extended improvisations such as The Hall of the Mountain King, a number they playing in concert that often stretched out into a fifteen-minute flight of fancy. After Janis came, the format became more structured to accommodate a vocalist.

In August 1966, Big Brother went to Chicago for an extended engagement at Mother Blues, a major blues-rock venue. It was there that they signed their first record contract with Mainstream Records. It was almost a year before their self-titled album was released. Their popularity grew and in June 1967 the band was invited to play at the Monterey Pop Festival. Their performance at Monterey – particularly Janis and her “screamingly mournful vocals and potently sexual stage act”, as a reviewer wrote – truly shot Big Brother into the national spotlight.  Janis was hailed as a great blues singer.  Ed Denson of the Berkeley Barb also observed that “it was the instrumentalists who really made the group out of sight.”

Following the Monterey Pop Festival performance, Big Brother was signed by Columbia Records. Their second album, Cheap Thrills, was a tremendous success, monopolizing the #1 spot on the charts for 8 weeks. The musicianship on the album is unparalleled. James Gurley, who has been called the “Father of Psychedelic Guitar” by Guitar Player magazine, and Sam Andrew took the dueling lead guitars to new heights. Rick Clark, in the All Music Book, said: “Anyone who thinks Guns N’ Roses mastered hard electric blues-grunge hasn’t heard Big Brother’s James Gurley and Sam Houston Andrew duke it out on tracks like ‘Ball And Chain’, ‘Summertime’ and ‘Combination Of The Two’.”

By the close of 1968, Janis Joplin decided to leave the band. Sam Andrew joined her in her new Kozmic Blues Band, and Peter Albin and David Getz joined Country Joe and The Fish. Big Brother ceased to exist for a period of months; but by the early fall of 1969 the band was resurrected. and two more Columbia albums were released.

Over a period of months beginning in 1972 Big Brother began to come apart as a band as the individual members became involved in other bands and musical projects.  Big Brother and the Holding Company reunited only once, for an October 1978 show organized by Chet Helms at the Greek Theatre in Berkeley.

The rebirth of the band occurred almost ten years later in 1987, coinciding with the twentieth anniversary of the Summer of Love. The current lineup consists of original band members Peter Albin, Sam Andrew, and David Getz. The band has been actively touring since l987. The backbone of Big Brother & the Holding Company remains its solid rhythm section and signature psychedelic blues guitar. Bay Area guitarist Tom Finch has been with the band for the last three years and vocals have been shared by some very talented ladies, including Lisa Mills, Halley Devestern, Lisa Battle, Cathy Richardson, and Andra Mitrovich, the latter two starring in the play Love, Janis.

Big Brother & the Holding Company has had two successful albums since Janis Joplin left – “Be A Brother” and “How Hard It Is”. Reviews of SONY releases finally credit the band’s contribution to launching Joplin’s career and acknowledge they were probably the best band she ever sang with.

The dueling guitars of Andrew and Gurley, the rhythmic bass of Albin, and the solid beat of Getz sound as fresh and crisp today as it did thirty years ago and they have played to enthusiastic audiences around the world. This edition of Big Brother and the Holding Company is a band not to be missed.