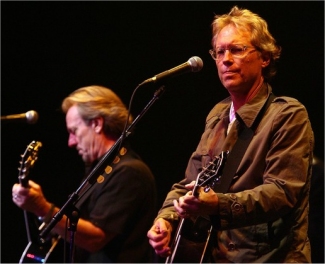 The mysterious “Horse with No Name” appeared on the music scene in 1972, becoming a major hit for the young musicians, known as America, who harmonized their way to the top of the charts on the strength of this song.

America’s journey has taken them into a wide variety of musical terrain, and a look backward seems overdue as they enter their fourth decade.

Their music became a fixture of 1970s Top 40 and FM Album radio. Yet there was always more to America than the hits indicated.

In many ways the band was rooted in the melodic pop rock of the British Invasion, most particularly in Gerry Beckley’s hook-laden songwriting. This connection was made explicit when legendary Beatles producer George Martin came on board to help refine their sound. For his part, Dewey Bunnell brought a tinge of folk-jazz, combining Latin-leaning rhythms with playfully rhyming words and impressionistic lyric imagery. Dan Peek’s contributions often tapped into a country-rock vein, with a strong element of personal confession.

America’s albums, (six certified gold and or platinum, with their first greatest hits collection, History, reaching the 4 million sales mark), displayed a fuller range of the group’s talents than did their singles.

Success came to America young, even by the standards of rock artists of the early ’70s. They literally learned on the job and grew up amid the madness that is the music business. Earning a #1 record and a Grammy for Best New Artist while barely in your twenties has its perils, and the pressures of the pop-star lifestyle affected each of them.

Personal hassles and a rigorous touring and recording schedule caught up with the band in the middle of the decade. When Peek left the group in 1977, his bandmates rose to the challenge of carrying on as a duo. Shifts in sound, changes in producers and managers, and a renewed dedication to the craft of songwriting came in the ’80s.

America returned to the upper reaches of the Pop chart in 1982 with “You Can Do Magic” and brought their live show to audiences in new corners of the globe. Beckley and Bunnell came into their own as mature artists during this time in many ways. Their growth has continued into the present day with such impressive releases as 1998’s Human Nature.

America’s songs have frequently dealt with themes of travel and restlessness – from such early compositions as “A Horse With No Name” and “Ventura Highway” through such recent tunes as “From A Moving Train”. Their box set, Highway, released in 2000 captures the highlights of where their music has carried them and chronicles the changes they’ve gone though both artistically and personally. And change, of course, has always been a very American quality.

More new music can be expected from America in the years ahead. And, as ever, the touring continues as the band looks forward to many more years on the road.