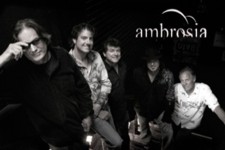 Ambrosia all hail from LA’s South Bay, San Pedro/Harbor area. They released their debut album for 20th Century Fox “Ambrosia” in 1975 producing their first top 10 CHR hit “Holdin On To Yesterday” and hailed by Billboard magazine as a ‘masterwork’. It was also nominated for a Grammy for engineering excellence (mixed by Alan Parson’s of Pink Floyd’s “Dark Side Of The Moon” fame).

Their 2nd release (1976) was “Somewhere I’ve Never Traveled” also produced/ engineered by Parsons; again receiving a Grammy nomination for engineering and solidifying them as a favorite at college & FM radio throughout the country-Billboard also spotlighted this release as a ‘work of collective genius’ and critics around the country agreed.

They toured with a group of six at the time, adding Royce Jones (Steely Dan) on percussion/ vocals, and David Cutler Lewis (Shadowfax) on Synths. Their TV.. appearances at the time also included hosting “Don Kirshner’s Rock Concert”, “Midnight Special”, and “Merv Griffin”!

Warner’s 1980 release “One Eighty” was their most successful album, spawning hit singles “Biggest Part Of Me” (#1 Radio & Records) and “You’re The Only Woman” (top 10 CHR). They continued to successfully tour around the world as a headline act. 1982’s “Road Island” was produced and engineered by James Guthrie (Pink Floyd’s “Wall”) and recorded in London.

In 1989 the four original members of Ambrosia reunited for a reunion tour and continue to work together. Warner Bros. released an Ambrosia greatest hits compilation, “Anthology”, in 1997. In 2002 the band released a live album, “Live At The Galaxy”, and a best-of album with the tracks remastered, titled “The Essentials”, which includes a broad spectrum of their music. In 2004 they released their album titled “How Much I Feel And Other Hits.”