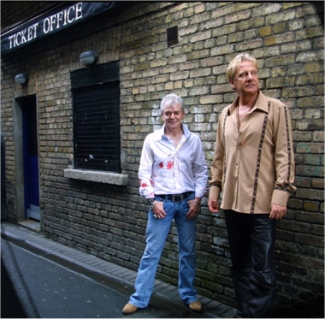 Graham Russell and Russell Hitchcock first met in 1974, during an Australian production of Jesus Christ Superstar, in which they had both secured roles as apostles. On break time between rehearsals, Graham would sit by himself and play his guitar. It didn’t take long before a curious Russell wandered over and began to sing along with Graham’s tunes, and the two quickly discovered a smooth musical harmony as well as a friendship that would endure over the years.

They began singing in the local coffeehouses in Australia, sometimes for their meals, and often performing soft, mellow love songs, which were contrary to ‘hard rock’ and ‘glam rock’, both of which were popular then.

Forming their own group, they dubbed it “AIR SUPPLY”, a name that Graham says ‘came to him in a dream … on a billboard.  He thought of their music as a “breath of fresh air”, and it was indeed. It was also a hit!

After the completion of ‘Superstar’ in 1975, they joined up with Frank Esler Smith (music director of ‘Superstar’) as well as Jeremy Paul, signed a contract with CBS records, and released their first big hit, Love & Other Bruises in 1976, which also saw them rank on the Australian music charts at a whopping #5!

They followed with a gold record from the self-titled album Air Supply, and in 1977, scored another big hit, Do What You Do, from their second album The Whole Thing’s Started. The same year, their good friend, Rod Stewart, asked them to join him on a tour through the United States and Canada. This opportunity provided the stepping stones that would enable Air Supply to begin its rise to fame in America.

During this time, Jeremy Paul left them (later joining the DeVinyls) and the band was rearranged. In April 1979, they released Life Support in Australia, their third album. One of the songs, Lost In Love charted immediately, upon its release, within the top 20.

Meanwhile in America, Clive Davis at Arista signed Air Supply to a $1.5 million international deal, and released a revised, more ‘hip’ version of Lost In Love in the United States. By February 1980, the song had already reached #3 on Billboard’s chart hits. This was the first of seven consecutive singles to enter the American top 5. Over the next three years, Air Supply produced hit after chart-rating hit: All Out Of Love, Every Woman In The World, Just Another Woman, The One That You Love, Here I Am, Sweet Dreams, Even The Nights Are Better, and the Jim Steinman penned song smash hit Making Love Out Of Nothing At All, which remained at the #2 spot on Billboard for 3 weeks.

After a 2-year break, they came back in 1985 with the single Just As I Am, on yet another self-titled album, followed the very next year by another album, Hearts In Motion, and followed still by The Christmas Album. There would then be another break, one in which Graham Russell would return to England to create the rock opera ‘Sherwood’, and Russell Hitchcock would release his solo album, the self-titled Russell Hitchcock.

in the late 80s, they broke with Arista and 1991 saw Air Supply come back strong under a new label: Giant released The Earth Is. This album has a theme to it, mainly the preservation of peace and love throughout the world. Thus began a trend where they would release another album, every other year.

What is to come next from this fantastic group? One thing is certain, it will definitely contain more of the soft, melodic harmony of Graham and Russell, filled with the acoustical talents of a great band, and be instantly bought up by the fans, who will ‘Never Get Enough’ of Air Supply!