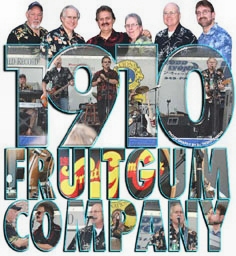 In 1967, the 1910 Fruitgum Company® was signed to a recording contract with Buddah Records. Their first release in 1968, Simon Says, became a top of the chart hit in the US and ranked number two in the United Kingdom, staying on the charts for over 10 weeks.

The group followed up with 1-2-3 Red Light which hit the charts and got to number three on the US National charts. Following was Indian Giver in March of 1969 which reached number eight on the charts and was copied by Joan Jett and the Ramones.

All three records sold millions and credited the 1910 Fruitgum Company with three gold records. The group had a total of eight charted hits and numerous albums throughout the world.

Today, the 1910 Fruitgum Company is back with original members and a lineup of great vocalists and musicians who perform the original hits along with the top hits of the 60’s.

The 1910 Fruitgum Company has been interviewed by VH-1 for a special and has played all over the United States. Our members have toured, and or performed with such acts as The Beach Boys, Trini Lopez, Sly and the Family Stone, Peter Noone and Herman’s Hermits, Mark Lindsey of Paul Revere and the Raiders, Ron Dante of the Archie’s, Tommy Roe, The Vogues, The Dubs, The Drifters, Lou Christie, The Lovin’ Spoonful, Joey Dee, Alan O’Day, Bo Donaldson and the Heywood’s, Eddie Brigati of the Rascals, Dennis Tufano of the Buckinghams and numerous other acts, as well as appearing on American Bandstand and several other television shows.

The 1910 Fruitgum Company performs a show that will have its audience dancing in the aisles.