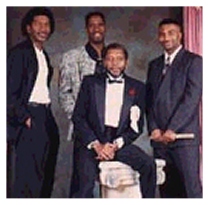 The Del-Vikings are a vocal group that came together in a Pittsburgh Air Force Base. When their single “Come Go With Me”, featuring the lead vocals of Norman Wright,  in early 1957, it began a 31-week run on the charts, reaching number four on the pop chart and number three on the R&B chart during the spring and early summer. The group was now in demand nationwide was booked on tours across the country, as well as a featured spot in one of Alan Freed’s Brooklyn Paramount shows.

Following on its heels, in the late summer of 1957, “Whispering Bells” reached number nine on the charts. More hits followed including, “Sunday Kind Of Love” on the Mercury label. They also recorded several albums including THE BEST OF THE DEL-VIKINGS (DOT) and THEY SING, THEY SWING…THE DEL-VIKINGS (MERCURY).

The popularity of their top two songs will never fade. Both of these hits continue to be listed in the top twenty doo wop songs of all time on many lists. They have also been memorialized in motion pictures, such as American Graffiti, American Hot Wax, The Hollywood Knights, Diner, Stand by Me, and Joe Versus the Volcano.

The world premiere single hit song, “Share The Night” put them on the music charts in 1985. “Come Go With Me” was played at the 1996 Summer Olympic Games, held in Atlanta, Georgia on August 4, 1996.

The Del-Vikings have performed world-wide in major clubs, in concerts and on television specials. They have performed in Las Vegas and Atlantic City, at Radio City Music Hall in New York City, the Universal Amphitheater and the Greek Theater in Los Angeles.

A “high energy” act, dancing and singing the great hits of doo-wop, rock’n’roll, pop and rhythm & blues, the Del-Vikings play to Standing Room Only audiences wherever they appear.