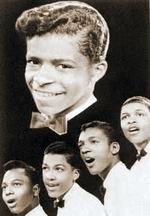 Little Anthony & the Imperials enjoyed one of the longest career runs of any doo wop group, adapting their honey-smooth style to fit the sweet uptown soul sound of the mid-’60s. Right from the beginning, Little Anthony’s aching way with a ballad was the group’s calling card, but their repertoire was balanced by more R&B-inflected dance tunes.

Little Anthony was born Jerome Anthony Gourdine in 1940, and grew up in Brooklyn’s Fort Greene projects. While in high school, he sang in a doo wop group called the Duponts, who recorded a single called “Prove It Now” in 1957. They disbanded after graduation, however, and Gourdine joined another group called the Chesters, which had been formed by his friend Clarence Collins (baritone) and also featured longtime friend Ernest Wright, Jr. (tenor); the other members were Tracy Lord (tenor) and Nat Rogers (bass). After a one-off single for Apollo, they landed a record deal with the End label in 1958, at which point their name was changed to the Imperials. (“Little Anthony” was later tagged onto the beginning by DJ Alan Freed.)

The Imperials’ first single for End was the classic heartache ballad “Tears on My Pillow” — a Top Five smash on both the pop and R&B charts. Little Anthony’s dramatic interpretation was certainly helped in the public eye by his youthful-sounding voice and name, which recalled the recently popular Frankie Lymon. The single’s B-side, “Two People in the World”, was also something of a hit, making the Imperials one of the hottest vocal groups around. Landing a follow-up hit proved difficult, however; the group charted several singles — “So Much,” “Wishful Thinking,” “A Prayer and a Juke Box” — without even approaching their earlier success. Finally, the novelty dance track “Shimmy, Shimmy, Ko-Ko-Bop”caught on in 1960 and returned Little Anthony & the Imperials to the upper reaches of the charts (though it missed the Top Ten). The follow-ups “My Empty Room” and “Please Say You Want Me” flopped, however, and Little Anthony decided to try a solo career in late 1961.

The Imperials continued on with a new lineup of Collins, Wright, Sammy Strain, and George Kerr, the latter of whom was replaced by Kenny Seymour in 1962. Neither Little Anthony nor his erstwhile group had any luck on their own, and in late 1963 he returned to the fold, replacing Seymour. The next summer, the reconstituted Imperials signed with the DCP label, where producer/songwriter Teddy Randazzo made them a priority. His first effort with the group, “I’m on the Outside (Looking In)”, reached number 15 on both the pop and R&B charts in 1964, reestablishing the Imperials as a commercial presence. The follow-up, “Goin’ Out of My Head”, was a smash, returning them to the pop Top Ten for the first time since “Tears on My Pillow”; it was covered quite often in the years that followed, and grew into something of a pop standard. The Imperials’ streak of good fortune continued with the equally dramatic ballad “Hurt So Bad”, another Top Ten hit that also became their second R&B Top Fiver in 1965. A couple of smaller hits followed later that year in “I Miss You So” and the pop/R&B Top 20 “Take Me Back”.

Little Anthony & the Imperials continued to chart singles over the next several years, but only one — 1969’s “Out of Sight, Out of Mind” — breached the Top 50 on either the pop or R&B sides. That same year, the group switched labels to United Artists, and Ernest Wright, Jr. departed to join singer Tony Williams’ latter-day version of the Platters. He was replaced by a returning Kenny Seymour, who was in turn replaced by Bobby Wade in 1971, the year of the group’s last chart single, “Help Me Find a Way (To Say I Love You)”. Sammy Strain left in 1972 and wound up joining the O’Jays four years later; his replacement was Harold Jenkins. Little Anthony himself left the group a second time in 1975 to pursue solo recording as well as an acting career, which effectively spelled the end of the road; nonetheless, a Collins-led lineup did manage to score one last hit in the U.K., 1977’s “Who’s Gonna Love Me”. Little Anthony became a born-again Christian in 1978 and subsequently recorded a gospel album, Daylight. Anthony, Collins, Wright, and Strain reunited in 1992 and toured the oldies circuit steadily thereafter. ~ Steve Huey, All Music Guide

BOOK LITTLE ANTHONY AND THE IMPERIALS