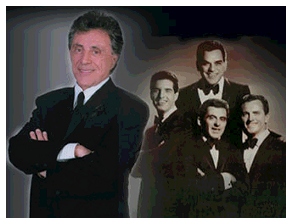 Frankie Valli was born in the Italian First Ward of Newark, New Jersey as Francis Stephen Castelluccio on May 3, 1937, and went on to achieve worldwide fame both, as lead singer of The Four Seasons, one of the biggest music acts of the 1960s, and also as a solo artist.

Frankie’s future course was set when, at age 7, he saw a young Frank Sinatra perform at the Paramount in Newark.  Beginning his singing career in 1952, he changed his name to “Frankie Valley,” in 1953 to express his admiration for his favorite female singer, Jean Valley, and cut his first single, “My Mother’s Eyes”. In the mid-50s, he joined The Variety Trio, which consisted of Tommy DeVito, twin brother Nick, and Hank Majewski. Redubbing themselves the Variatones, and later, “The Four Lovers”, they had a top 40 hit with “Apple of My Eye” in 1956.  During several appearances on The Ed Sullivan Show, they met another young rising star, Elvis Presley.

In 1960, the group renamed itself “The Four Seasons” after a bowling alley in Union, NJ where they had been turned down for work. About the same time, Frankie began to use the Italian version of Valley. Nick DeVito and Majewski left the group in 1960 or 1961 and were replaced by Bob Gaudio and Nick Massi.

In 1962, the group recorded its first megahit, “Sherry”, written by Four Season keyboardist and tenor Bob Gaudio. “Sherry” received limited airplay until an appearance on American Bandstand catapulted the song to the top of the pop charts, earning the group its first gold record. It was one of the fastest rising songs ever released.

The song was quickly followed by a second hit, “Big Girls Don’t Cry”, also written by Gaudio. Both tunes were certified platinum after remaining Number One hits for five weeks each. The Four Seasons had found their sound and continued to score hit after hit with “Walk Like a Man,” “Rag Doll”, “Ain’t That a Shame,” “Candy Girl”, and “Marlena”, among many others.  With his three-and-half-octave range, a natural baritone that glides effortlessly into a spectacular falsetto, Frankie Valli has sold 100 million records over the course of his career.

Even the British Invasion could not knock The Four Seasons from their perch by this time.  They continued to thrive with 3 Top Five hits during 1964, a very hard year for American artists.

In 1966, while remaining devoted to the Four Seasons, Frankie decided to try his hand solo record and scored a Top 40 hit with “You’re Gonna Hurt Yourself”. That same year the Four Seasons reached No. 3 on the pop charts with “Let’s Hang On”. The following year, Frankie’ classic “Can’t Take My Eyes off of You” rose to number two, while other solo entries “I Make A Fool of Myself” and “To Give (the Reason I Live)” both became Top 40 hits; the Four Season’s also had three Top 40 entries that year, including the gold selling “C’mon Marianne”.

For the next several years, Frankie Valli and the Four Seasons continued to tour extensively, playing to packed houses throughout the United States, Europe and Asia.  A memorable highlight came when the Four Seasons performed at the Paramount Theater for a crowd of screaming female fans 20 years after Valli had so admired Sinatra’s performance there. 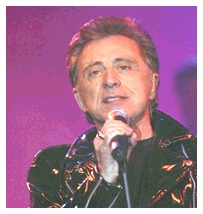 By 1974, Frankie was back at the top of the charts again, going platinum with another big winner “My Eyes Adored You”. Then “Swearin’ to God”, with its disco beat and contemporary sensibilities went gold in 1975. The following year, The Four Seasons were No. 1 on the charts for 3 weeks with the fantastic  “December, 1963 (Oh, What a Night)”.

In 1978, Frankie Valli scored again with the title track, “Grease”, from the best selling soundtrack of the popular movie starring Olivia Newton-John and John Travolta.  In 1987, “Big Girls Don’t Cry” was featured on the tremendously successful “Dirty Dancing” soundtrack from that movie, as well as Ricki Lake’s 1989 TV movie “Babycakes”. Entering the singles chart for a second time after appearing on the Forrest Gump soundtrack,  “December, 1963 (Oh, What a Night)” became the longest-charting single in history with 50 total weeks.

Frankie Valli and the legendary Four Seasons were inducted into the Rock and Roll Hall of Fame in 1990. When the band was named the “longevity champ of the rock era” by Billboard Magazine, The Four Seasons were recognized among an elite handful of acts who have accomplished chart singles in every decade since the 1950s.

Frankie Valli and The Four Seasons have continued to entertain audiences throughout the world for four decades.