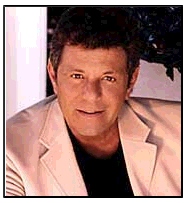 Born on September 18, 1940 as Francis Thomas Avallone, Frankie Avalon started out playing the trumpet. He was good enough to catch the eye of a local talent scout, who arranged for him to appear on Jackie Gleason’s CBS-TV show, which led to other appearances on national television.

By the time he was 12, he had joined Rocco and the Saints, a dance band that feature another boy from the CR Club, drummer Robert Ridarelli, soon to call himself Bobby Rydell. The combo played parish bazaars, shows at the Sons of Italy Hall, weekend sock hops. in school gyms, and weekend dances at teen clubs. Rocco and the Saints were regulars at Somers Point, a vacation resort in the summer.

Frankie sang his first release “De De Dinah” on “American Bandstand” a week before its  national release and the song soon sold a million copies. Frankie’s released several more records in the same vein that also sold well. Then came “Venus”, his biggest hit, selling more than a million copies in the spring of 1959. Frankie soon followed this up with several more million sellers, such as “Bobby Sox To Stockings,” “Just Ask Your Heart”, and “Why”.

As the days of the 50s teenage idol were on the wane, Frankie began appearing in movies in 1960. He co-starred with Alan Ladd in “Guns of the Timberland” and appeared in John Wayne’s “Alamo”, and 1963’s “Drums of Africa”, to name a few. He also sang the title song of 1961’s “Come Fly With Me”.

Then he teamed up with former Mousketeer and recording star, Annette Funicello, to appear in a string of very popular musical fun in the sun “Beach” movies, such as “Beach Party”, “Muscle Beach”, Beach Blanket Bingo”.  The two popular stars got back together in 1987 to appear in a ‘reunion’ beach film parody entitled “Back To The Beach”.

Throughout the remainder of the 60s, Frankie continued his work in both fields and in 1978 he appeared as the Teen Angel in the musical “Grease” singing “Beauty School Dropout.”

Frankie appearing in many of Dick Clark’s musical productions for television and in the 80s, he began touring with his fellow Philadelphian rock idols and boyhood chums, Bobby Rydell and Fabian, as “The Golden Boys of Bandstand”. The Golden Boys spotlights each of the performers and their All Time greatest hits, “Turn Me Loose”, “Tiger”, “I’m A Man” (Fabian); “Venus”, “De De Dinah”, “Bobby Sox to Stockings” (Avalon); “Volare”, “Wild One”, “Kissin’ Time” (Rydell). The three stars combine their talents on several songs and perform a tribute to the material of Elvis Presley, Bobby Darin, Rick Nelson and Bill Hailey.

Frankie Avalon successfully made the transition from “teen age idol” to a mature professional performer and actor. He has never stopped acting or making personal appearances in nightclubs and concerts. When he takes the stage, audiences are transported by his superb performance. Frankie is a class act!