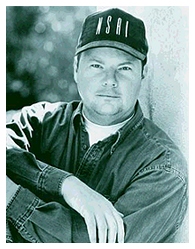 For music lovers, the name Christopher Cross conjures up a wide variety of images: the hard-rocking narrative of “Ride Like the Wind”; the delicate introspection of “Sailing” and “Think of Laura”; the classic pop stylings of “Arthur’s Theme” and “Never Be the Same”. In these days of mind-numbing overspecialization, the word versatile says a great deal about an artist.

Christopher burst onto the scene early in 1980 with one of the most celebrated debut albums of all time, collecting a total of five Grammys for the surprisingly mature first effort, which yielded four hit singles and sold more than six million copies worldwide. The huge success of “Arthur’s Theme” followed immediately, earning an Academy Award for Christopher, Burt Bacharach, Carole Bayer Sager and Peter Allen, and firmly established Christopher in the pop music hierarchy.

Throughout the eighties, Cross continued to make his own brand of “pop ‘n’ roll” music, releasing three more albums: Another Page, released in 1983 contained two hit singles, “All Right” and “Think of Laura”. ABC’s daytime show, General Hospital, chose to use this as the theme song for the characters Luke and Laura.

Every Turn of the World, released in 1985, was delayed by broken bones in Christopher’s hand suffered in a wreck during his foray into racing cars. This album coupled him with some very talented writers – John Bettis, Will Jennings, Billy Alessi and his producer, Michael Omartian, and revealed an edgier side than his previous efforts. Back of My Mind, released in 1988, continued his co-writing, this time reuniting him with Rob Meurer, the keyboard player who had been with him since the Texas bar band days. Steve Dorff invited Christopher to write a song with him for the popular TV show, Growing Pains. The result, a tender ballad titled “Swept Away” was the love song in the “Hawaii Episode” and garnered an Emmy nomination. At this point, Christopher and Warner/Reprise mutually decided to end their ten-year association and Christopher faced a turning point in his life.

Without a record company behind him, he decided to move his family away from the “L.A. scene” and regroup. A revitalized Cross recorded Rendezvous in 1992 which again coupled him with Rob Meurer, not only as co-writers, but also as co-producers. The freedom to create what was in their hearts resulted in the intensely personal “A Fisherman’s Tale”, the autobiographical “Deputy Dan”, and the signature balladry of “Is There Something”, written with Steve Dorff and Cynthia Weil. Cross and Meurer teamed up again as writers and producers with the release of Window. The first single, “Save Your Sadness” (a remix of “Jan’s Tune”), was written for his wife. The single “Open Up My Window” is a duet performed with Gigi Worth, who also plays percussion and guitar in the touring band. “Before I Go”, an intensely personal song, will touch the hearts of parents everywhere. He even takes time to poke some fun at his Warholian fame in “Been There Done That”, written and produced with Dennis Lambert.

After the release of Window, Christopher and his band took to the road, not leaving a corner of the U.S. untouched. His first-ever European tour proved that Christopher’s music knows no geographical boundaries, a fact Japanese fans have known for years. He also released Walking In Avalon / Red Room, the very pinnacle of Christopher Cross music.

He continues to seek out his fans worldwide by regularly hitting the concert road, never depriving those fans of the early hits (played note-perfect) but always insisting on featuring a broad range of his latest work, the songs where his heart (and his art) truly lies. The audience response is never less than rapturous.