In 1957 a group of friends in a Detroit, Michigan high school came together to make music. Billy Henderson, Henry Fambrough, Pervis Jackson, George W. Dixon, and Bobbie Smith called themselves the Domingoes, but soon changed their name to The Spinners. 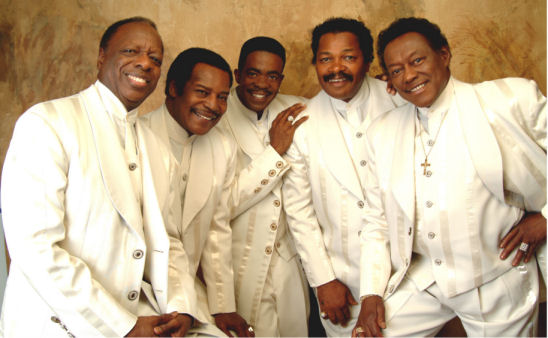 The Spinners first hit the charts in 1961, with “That’s What Girls Are Made For”. In 1964, they made their debut at the Apollo Theater and won instant acclaim, a rare feat at the time. They also signed to V.I.P. Records, an imprint of Berry Gordy’s Motown label, based in Detroit.

Success was elusive until 1970, when a Stevie Wonder composition, “It’s A Shame”became a hit. When singer Philippe Wynne joined the group, as legend has it, Aretha Franklin suggested the group finish out their Motown contract, then change to Atlantic Records.

The Spinners then began a stupendous climb up the charts that put 11 songs in the Top 40 pop charts between 1972 and 1976. With songs like “I’ll Be Around”, “Sadie”,“Could It Be I’m Falling In Love”, “The Rubberband Man”, “One Of A Kind (Love Affair)”, “They Just Can’t Stop It (Games People Play)” and “Then Came You” (with Dionne Warwick), The Spinners cemented their place in pop music history.