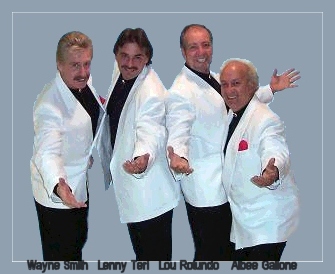 The Passions are one of the best Brooklyn vocal groups to emerge from New York City in the late 50s and early 60s. They started out as the Sinceres, one of several vocal groups whose “harmony haven” was the alley alongside Loew’s Oriental Theatre in the Bensonhurst section of Brooklyn. Nearby Kelly’s Pool Room occasionally served as a rehearsal hall. Another neighborhood group, the Overons, had just signed a contract with manager Jim Gribble, and in 1959 recorded Hushabye for Laurie Records. They changed their name to the Mystics, and Hushabye went on to become a national hit record.

Soon after, the Sinceres were introduced to Jim Gribble by their good friends the Mystics. The Sinceres also signed a management contract with Jim Gribble. They were then introduced to Sol Winkler of Audicon Records. Mr. Winkler offered the Sinceres a song called “Just To Be With You”. The demo of the song, written by Marv Kalfin, had been recorded by the Cousins, who were soon to become famous as singers and songwriters: Paul Simon and Carole King!

The founder of the Sinceres, Albee Galione, changed the group’s name to The Passions and they recorded “Just To Be With You” in August of 1959. In October of that year the song hit #69 on the Billboard pop charts, and enjoyed a ten-week run on the charts. The Passions’ impeccable harmonies were heard on radios across America. In many Eastern U.S. cities, the song was a top 20 hit.

The Passions then recorded an equally strong record, “I Only Want You” on Audicon. This record reached #113 on the national Billboard charts on March 14, 1960. Disc jockeys played “I Only Want You” and the flip side, This is My Love, and both songs quickly became street corner doo wop standards. They continue to be considered classic songs of the genre. “This Is My Love” is often mistakenly called Sweeter Than, which is its opening line.

Today, The Passions continue to perform at many of the largest venues and finest concert halls in the Tri State area of New York, New Jersey and Connecticut, including Radio City Music Hall, Madison Square Garden, Nassau Coliseum, Meadowlands Arena, CPN Art Center, Westbury Music Fair, and the Paramount Theatre. They are also regulars in the Pocono Mountain Resorts and the beautiful Tropicana Show Room in Atlantic City.

An outstanding night club act, the pleasing mixture of solid vocal harmonies and and comedy has become The Passions’ trademark. With enduring hits such as “I Only Want You”, “Gloria” and “This Is My Love”, not to mention their million-selling“Just To Be With You”, the Passions have truly survived the test of time.

The Passions today consist of originator Albee Galione; Louis Rotundo, one of the finest lead singers on the circuit today; bassist/lead vocalist Lenny Trerotola; and lead singer Wayne Smith. They combine rock and roll tunes, love ballads, dance songs, nostalgia and a medley of comedy routines and a hilarious Elvis impersonation has to be seen to be believed!

A fun, solid class act, The Passions are guaranteed not to disappoint.