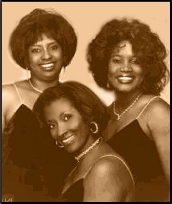 The Marvelettes occupy an esteemed place in the history of American popular music as the group that caused Motown, and most notably Berry Gordy to change the label’s focus from single bluesy soul artists (previously Barrett Strong’s “Money” had been the label’s biggest seller) to a smooth orchestrated harmonic sound that transcended the prior racial limits of rhythm and blues.

With their first record “Please Mr. Postman” hitting the top spot on the charts and selling 3 million records in a crossover market, Motown was to concentrate on the Marvelettes, Supremes, Temptations, Four Tops, and Martha and the Vandellas and create a new group pop soul sound that totally dominated the music charts until the advent of the Beatles four years later.

During their reign at the top of the charts the girls were to turn out over a dozen hits, eight of which went Top Ten.  These unforgettable hit songs, including“Too Many Fish In the Sea”, “Playboy”, “Beechwood 4-5789”, “Don’t Mess With Bill” and “My Baby Must Be A Magician”, continue to be popular to this day.

Although the group at times had more than three members, the originators were Wanda Rogers, Gladys Horton, and Katherine Shaffner. In the early years of the group, family ties forced all three to leave the act at various times (although Wanda and Gladys continued to make frequent “guest appearances”) but carefully chosen and highly talented replacements kept the act at the top of the charts even with changed personnel.

Once again this is a patented mark of Motown’s success story — the ability to change personnel in acts like the Supremes, Temptations and The Marvelettes and still keep the act at the top of the charts and in demand for personal appearances.

In fact it is in person where the current lineup really excels. Offering an act that features their big hits, interspersed with their versions of some great standards, the girls are still, in the smooth Motown vein, a highly choreographed, polished, very good looking and humorous night club act as well as a major draw.