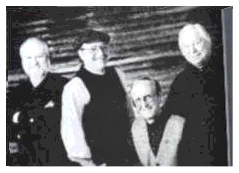 In a career that has spanned over 35 years and millions of records, the Crickets are unquestionably the American Rock and Roll band. Since the group’s founding in 1957 they have influenced virtually every major rock performer in this country and abroad – from Bruce Springsteen and Dylan to the Rolling Stones and Beatles (whose name was even Cricket-inspired). Their hits “That’ll Be The Day”, “Peggy Sue”, “Oh Boy”, “Not Fade Away”, “Maybe Baby”, “I Fought The Law “, and “More Than I Can Say” are bona fide rock classics and considered primary lessons in how rock music should be written, played and enjoyed.

The Crickets were formed in Lubbock, Texas by Buddy Holly and J.I. Allison, Joe B. Mauldin was recruited shortly thereafter. They were one of the first rock and roll bands ever to be self contained – writing, playing, producing, and recording their own material. The Crickets toured and recorded until late 1958 when Buddy decided to move to New York and get more involved in the business side of music. J.I. and Joe B. made a deal with Buddy to keep the name The Crickets, and called their old friend Sonny Curtis. (Sonny had played lead guitar and fiddle in the earlier groups with Buddy and J.I.) Sonny joined the group and more time was spent in the studio than on the road. The Crickets’ first album without Buddy (In Style With The Crickets) was done in Clovis, New Mexico; New York; and finished in Los Angeles. The classic “I Fought The Law” and “More Than I Can Say” were introduced on this album. Los Angeles was home for the next 15 years.

Drummer J.I. Allison recorded with The Everly Brothers, Eddie Cochran, Bobby Vee, Johnny Burnette, Johnny Rivers and many others. His distinctive drumming style on such hits as “Peggy Sue” by Buddy Holly and “Till I Kissed You” by The Everly Brothers are among the most memorable rock and roll drum licks ever recorded. Phil Everly has called Allison “the most creative drummer in rock and roll”, a fact reinforced by Dell – Rolling Stones’ Book of Lists which ranks Allison among the top three rock and roll drummers of all time. Allison wrote such songs as “That’ll Be The Day”, “Peggy Sue”, and “More Than I Can Say “.

Bassist Joe B. Mauldin, who also ranked among the top rock bassists by the Book of Lists, became a recording engineer at Gold Star Studios, the legendary Los Angeles studio that became the hit factory for Phil Spector, Brian Wilson and other major 60’s rock performers. While at Gold Star, Mauldin engineered many hit recording sessions including those with Herb Alpert & The Tijuana Brass, the Baja Marimba Band, Phil Spector, Leon Russell, and Maureen McGovern. An accomplished writer as well as performer, Mauldin penned “Last Night”, “I’m Gonna Love You Too”, and “Well All Right”. He has toured with The Everly Brothers, Johnny Burnette and Waylon Jennings.

Lead guitarist and vocalist Sonny Curtis spent time doing studio work, working on movie sound tracks, writing and recording commercials, touring, and writing hit songs, such as “Walk Right Back”, “I Fought The Law”, “More Than I Can Say”, “The Straight Life”, “I’m No Stranger To The Rain” and many others which have been recorded by artists from Bing Crosby to The Bear on The Andy Williams Show. Sonny also built a successful recording career as a solo artist, with hits including “Good Old Girls” and “Cowboy Singer” Anyone who has ever seen the Mary Tyler Moore show knows Sonny; he wrote and sang the theme song “Love Is All Around”.

In the mid 70s, the Crickets moved to the Nashville area and began a long association with Waylon Jennings whom they had known since the early Lubbock days.The group also continued to record. In April of 1995, they recorded “Not Fade Away” with Levon Helm and The Band for a critically-acclaimed musical tribute to Buddy Holly entitled “Not Fade Away” released on Decca Records. The following year, The Crickets recorded “Too Much Monday Morning” an album of all new material and which featured guest vocalist Nanci Griffith. It was released on the British label, Carlton. That year they also toured extensively with Nanci Griffith and The Blue Moon Orchestra.

As the millennium approached, the Crickets were again in the studio with award winning producer Greg Ladanyi to record what may well be their most memorable album of all, “The Crickets and Their Buddies.” The album features 15 new tracks of the band’s classic hits with the Crickets joined by their “buddies” – Eric Clapton, Graham Nash, John Prine, Rodney Crowell, Albert Lee, Nanci Griffith, J.D. Souther, Johnny Rivers, Phil Everly, Vince Neil, Bobby Vee, Tonio K. & Peter Case, and Waylon Jennings (one of his last recordings).

It’s a fitting musical tribute to a band who literally defined rock and roll music, and who today, over 50 years later, still help set the standard of excellence by which it should be judged. Indeed, The Crickets’ influence will not fade away. Ever.