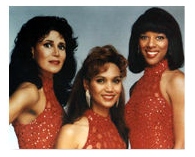 The Crystals were one of the most successful girl groups of the 1960s. Barbara Alston , Mary Thomas , Delores “Dee Dee” Kennibrew, Merna Girard and Patricia “Patsy” Wright formed the band in high school under the leadership of Alston’s uncle, Benny Wells. The group soon signed with Phil Spector’s label Philles Records. Spector then chose Alston to be the group’s lead singer, which made her very uncomfortable since she had a fear of singing in front of audiences.

Their first hit was 1961’s “There’s No Other Like My Baby”. The following singles, such as “Uptown” and “Oh, Yeah, Maybe, Baby” (this song features Wright on lead) were topical and socially-aware about growing up in the ghetto. After the success of “Uptown”, a pregnant Girard was replaced by Dolores “LaLa” Brooks. The next single was 1962’s “He Hit Me (It Felt Like a Kiss)”, a dark and strange affair for the period, still widely remembered though only rarely played on the radio due to the touchy subject matter of spousal abuse. Sales were sluggish.

Soon after, Phil Spector was recording a singer named Darlene Love under the name “the Crystals”. Her single, “He’s a Rebel”, is perhaps the Crystals’ most well remembered and beloved songs, and one of the most enduring of the girl group genre. After another Love song, “He’s Sure the Boy I Love”, the Crystals began recording again under the name. However, Thomas departed to get married which reduced them to a quartet, and Alston stepped down from the lead spot giving it to Brooks. Their next two releases were the classic “Da Doo Ron Ron” (US #3, UK #5) and “Then He Kissed Me” (US #6, UK #2).

Tension between Spector and the Crystals mounted as Darlene Love recorded more songs under their name. In 1964, Spector began focusing his time on The Ronettes. A series of failed singles followed. 1964 also saw the departure of Wright who was replaced by Frances Collins ; toward the end of that year Alston departed leaving the group a trio. They disbanded in 1966.

If you are fortunate to be in an area where they are performing, don’t miss it! It’s guaranteed to be not only be a visual delight, a fantastic stroll down memory lane, but a joyous celebration of the 60s girl group sound as only The Crystals can do it.