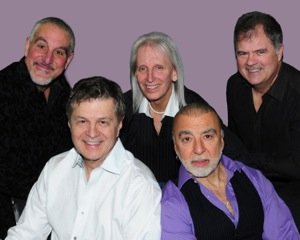 It all started with “KIND OF A DRAG,” the #1 Billboard hit recorded by five teenagers from Chicago’s west side.

For the past two and a half decades, THE BUCKINGHAMS have successfully toured the nation with their signature pop music featuring founding members Carl Giammarese (lead vocals) and Nick Fortuna (bass and vocals). Their show is filled with harmony, spontaneity, humor, and a musical strength that appeals to not only their loyal fans, but forges new links with younger generations as well. THE BUCKINGHAMS deliver a spectacular live show that includes their Billboard Top 40 hits, and a mix of audience’s sizzling favorites from the pop & rock charts of the 1960’s and early 1970’s.

In the mid-sixties, THE BUCKINGHAMS were just neighborhood kids drawn together by music. That all changed when they landed a spot on a local teen showcase that led to a record contract with USA Records for their first release in 1966. Quickly, the band moved on to Columbia Records for their follow up singles, “DON’T YOU CARE”, “MERCY, MERCY, MERCY”, “HEY BABY, THEY’RE PLAYING OUR SONG” and “SUSAN”. Television appearances on The Ed Sullivan Show, Jerry Lewis, Dick Clark’s American Bandstand, and The Smothers Brothers Comedy Hour, as well as extensive coverage in magazines confirmed The Buckinghams’ stardom. Their succession of hits led them to being named “The Most Listened To Band In America” in 1967 by the radio trade papers. Today, THE BUCKINGHAMS are in heavy rotation on ‘oldies’ pop radio stations nationwide. Along with current airplay on JACK, classic rock and satellite radio, THE BUCKINGHAMS’ hits are “Live and Well” as the title of their 2005 CD boasts.

They were included in the PBS special, “The 60’s Pop/Rock Reunion,” which was recently recorded in Cleveland. It continues to air and be sold as a DVD premium in the PBS nationwide subscription drives. In addition to the airing of that special, THE BUCKINGHAMS continue to reach national television audiences with appearances on Entertainment Tonight, NBC’s Summer Concert Series, and Good Morning America.

In 2001, THE BUCKINGHAMS enjoyed large concert venue success on the “Solid Gold 60’s” summer tour. They performed across the United States at concert halls and outdoor amphitheaters with co-headliners, Tommy James & The Shondells, Herman’s Hermits starring Peter Noone, The Turtles featuring Flo & Eddie, and The Grass Roots starring Rob Grill.

In the early 1980’s, THE BUCKINGHAMS were featured on the “Happy Together Tour” which was proclaimed one of the most successful tours of its time by Billboard and Performance Magazines.

THE BUCKINGHAMS continue to headline and perform in various concert packages throughout the U.S. and Canada!

In any setting … festival, casino, fair, concert, party or corporate event, THE BUCKINGHAMS create an immediate rapport with an audience, drawing them into the spirit and energy of the music. This is what makes THE BUCKINGHAMS more exciting today than ever before.