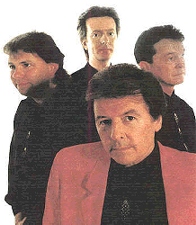 Like many Liverpool bands, The Searchers undertook an “apprenticeship” in the German port of Hamburg and were signed by Pye producer Tony Hatch when they returned to Liverpool. Their debut single was a cover of the Drifters’ “Sweets for My Sweet”. It quickly rose to No. 1 in the UK charts. This was followed by “Needles and Pins”, written by Sonny Bono and Jack Nitzsche originally for Jackie DeShannon. This track was the first Top 20  hit for the group in the lucrative US market, and it also went to No. 1 in the UK. Following up, Pye released the first album Meet The Searchers which included well-known tracks such as “Farmer John” and “Love Potion No. 9”.

When Tony Jackson left the band in early 1964, Mike Pender took over the lead vocals. The vacant bass guitar role was taken by Frank Allen (Francis McNeice) who had been a member of Cliff Bennett & the Rebel Rousers. The Searchers’ sound was different to many of the Merseybeat bands. One of the group’s trademarks was the distinctive harmonies that were helped by the fact that all four could sing well.

A cover of The Shirelles’ “Don’t Throw Your Love Away” gave the group its third No. 1, followed up with “When You Walk in the Room”, a track from Jackie De Shannon. This track featured the jingle-jangle sound of a 12-string Rickenbacker riff. In 1965, the Searchers released “He’s Got No Love”, the first time that the band had penned one of their own singles although they had written material for the albums that had been released.

By now the Searchers had become more popular in the US and “Love Potion No. 9”reached the No. 3 position  towards the end of 1965.

Chris Curtis left in mid-1966 and was replaced by John Blunt. However, like many bands the Searchers  were unable to make the transition as the music market moved away from single towards album-oriented rock. It became increasingly difficult to get Searchers’ singles to the top of the charts. Even new singles written by the likes of Jagger/Richard (“Take It or Leave It” from Aftermath) or “Have You Ever Loved Somebody”, written by Alan Clarke, Graham Nash and Tony Hicks of the Hollies, made little impression. The latter was the group’s final chart entry, reaching No. 48 in October 1966.

Mike Pender left The Searchers in 1985 to pursue his own career. He then hand  picked the cream of musicians and vocalists to recreate The Sound. MIKE PENDER’S SEARCHERS is the result.

They have literally traveled the world performing in Australia, U.S.A., Holland, Germany, Belgium, Sweden, Denmark, The United Arab Emirates as well as the length and breadth of Britain, playing and creating that distinctive sound which has become a legend in popular music.

Two big hits of the 60s still heard regularly on the airwaves today are “Needles and Pins” and “When You Walk in the Room” and both these songs are still particularly requested by audiences to this day.