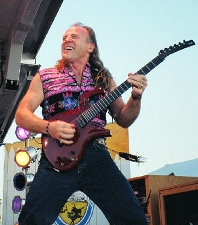 A true rock ‘n roll legend, Mark Farner found fame and success at 20 years of age as the leader of one of America’s biggest bands of the 1970’s – the original Grand Funk Railroad.

The band recorded 17 albums with total sales of more than 25 million records. Mark Farner is the unmistakable voice, guitarist, and songwriter that powered the original Grand Funk Railroad to 12 platinum and 15 gold albums.

After only 3 guitar lessons, Mark put various bands together. In the mid 1960’s, Mark and his bands played the usual dates that a teenage band would play – high school dances, VFW halls, wedding receptions and the like. Upon leaving high school, Mark turned professional, working with Terry Knight and the Pack, The Bossmen (with Dick Wagner), then just the Pack (this time with no Terry Knight, but with drummer Don Brewer).

In 1969, Mark started the original Grand Funk Railroad with teenage friends Mel Schacher and Don Brewer – one of the first American power trios was born.

Mark and Grand Funk hit big just several months after forming. They were the only unsigned act on the show when they opened the first day of the Atlanta International Pop Festival in July 1969. Mark and Grand Funk Railroad played before 180,000 people in 110-degree heat and the acclaim was instantaneous. They were invited back to close the show the next day.

Following their hugely successful Atlanta appearance, the band was signed by Capitol Records and their first gold album “On Time”, was recorded and released within four months.

The saga of Grand Funk Railroad is well documented. The albums included such titles as “Grand Funk Railroad”, “Survival”, “Live Album”, “Closer To Home”, “E Pluribus Funk”, “Phoenix”, “Good Singin,’ Good Playin'”, “Caught In The Act”, and “All The Girls In The World Beware”, among others.

The hit singles included “I’m Your Captain (Closer To Home),” “Foot-Stompin’ Music,” “We’re an American Band”, “the Loco-motion”, “Mean Mistreater”, “Bad Time”, “Some Kind Of Wonderful” and others.

In 1971 Mark and the original Grand Funk Railroad set the attendance record at New York’s Shea Stadium for a concert, surpassing the record set by The Beatles in 1966, and a record that still stands today, some 30 years later.

In early 1977, Grand Funk Railroad called it quits, and after taking a year or so off, Mark Farner signed a solo deal with Atlantic Records and issued two critically acclaimed albums: “Mark Farner” and “No Frills”.

Mark released 4 contemporary Christian albums from 1983 through 1994, earning a Dove nomination and reaching the #2 chart position with the John Beland composition “Isn’t it Amazing”. His continuous touring schedule kept him in contact with both his longtime Grand Funk fans, and the new fans that first noticed Mark during his solo years.

In 1995, Mark toured with Ringo Starr’s All-Star Band, then toured with The Northwest Airlines All-Stars in 1996 before reuniting with Don Brewer and Mel Schacher for a series of benefit concerts that were recorded, and released as the double live CD “Bosnia” for Capitol-EMI.

Since 1999 Mark Farner has been touring with his own band Nr’G. They have released 2 CD’s – “Red, White, and Blue” and “Live Nr’g” recorded in 2003. A new studio CD is currently being recorded.

Not slowing down, Mark Farner continues to electrify audiences with a mix of his original Grand Funk hits and music from throughout his 35 year professional career.