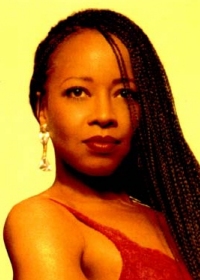 These are just some of the descriptions of JoJo, lead singer of the Mary Jane Girls. Her vocals on such hits as “All Night Long,” “In My House,” and “Candy Man” created an unmistakable sound heard world wide for the platinum-selling group.

The huge success of JoJo and the Mary Jane Girls enabled SRO international tours, along with numerous television and public appearances, such as the American Music Awards, Grammy’s, MTV, VH-i, and Soul Train. The group’s popularity established an international following still present today.

The 1990s brought continued success for JoJo. She performed with Rap Superstars — Ice Cube, Redman, and Mack 10. Additionally, her voice has been sampled by numerous recording artists, such as L.L. Cool J., Heavy D, and Mary J Blige, just to name a few. This has resulted in JoJo being the most vocally sampled singer in the history of music!

The time has now come for her to share her talents with the world as a solo artist.

JoJo — still the “flava” of music — past, present, and future.