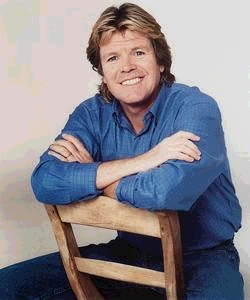 Peter Noone, the artist formerly known as “Herman”, was born on November 5, 1947 in Manchester, UK. His father was a semi-pro musician and keen that his son should follow in his footsteps, so Peter was sent to study singing and acting at the Manchester School of Music and Drama. He was something of a childhood star, playing Len Fairclough’s son in the soap opera Coronation Street as well as in the lesser-known Knight Errant and Family Solicitor. Combining this with local stage appearances, an acting career seemed inevitable but instead of becoming a film star, Peter became a pop star.

In 1963, he joined a Manchester beat group, The Heartbeats, after their vocalist failed to show for a gig. He used the name Peter Kovak. The change to Herman came after the band remarked on Peter’s resemblance to the character Sherman in the TV cartoon ‘The Bullwinkle Show’. Peter misheard the name as Herman and the group changed their name to Herman and The Hermits. It soon became abbreviated to Herman’s Hermits.

When the band was signed by Mickie Most, he got them a deal with EMI’s Columbia label. Mickie Most thought Peter Noone resembled a young John F. Kennedy and resolved to make him the focus of the group. Arrangements were made to record a Goffin/ King composition which had recently been a minor hit in the States for the Cookie’s vocalist, Earl-Jean, was I’m Into Something Good. It shot up the charts and spent 2 weeks at No 1 in September 1964.

The band made their first visit to the US, and made a cameo appearance in the teen movie When The Boys Meet The Girls. For their third UK single the group covered The Rays’ 1957 hit Silhouettes, which climbed to No 3 and was undoubtedly one of their better singles. In the US they went one place better with a Carter/Lewis song, Can’t You Hear My Heartbeat, outselling a rival version from Goldie and The Gingerbreads in the process. This gave them their second million-seller (I’m Into Something Good had been the first).

Their next 45 was a slick revival of Sam Cooke’s Wonderful World, which rose to No 7 In the UK in April 1965 and No 4 in the US a month later. They truly broke through in the US when an American DJ heard Mrs. Brown You’ve Got A Lovely Daughter on their first US album and persuaded their US record company, MGM, to release it as a 45. It spent 3 weeks on top of the US Charts, earning The Hermits another gold disc. It also topped the Australian Charts and sold 14 million copies worldwide. This success coincided with the group’s first full US tour.

A non-stop string of hit songs ensued: I’m Henry The Eighth (I Am), a revival of a 1911 music hall song, extracted from their album Herman’s Hermits On Tour gave them another No 1 and million-seller. Their final 45 of 1965 was a fine, jangling P.F. Sloan/Steve Barri song, A Must To Avoid, No 6 in the UK and No 8 in the States. In March 1966, the band issued another US-only single. Listen People, a slow ballad that made it to No 3, earning another gold disc. No Milk Today was an excellent pop song and their first 45 to employ an orchestra. As if that wasn’t enough, There’s A Kind Of Hush, a Les Reed/Geoff Stephens composition, made No 4 in the US and No 7 in the UK.

Ultimately, Herman’s Hermits sold over 60 million recordings. In all, 14 singles and 7 albums went gold. The Hermits were twice named Cashbox’s “Entertainer of the Year”.

The 80s found Peter starring on Broadway in the New York Shakespeare Festival’s production of The Pirates of Penzance. He won rave reviews for his superb portrayal of the dashing, young hero, “Frederic”. Peter’s acting career flourished with guest-starring roles in prime-time television shows such as: Married With Children, My Two Dads, Quantum Leap, Dave’s World, Easy Street, Too Close For Comfort and Laverne and Shirley. He also starred in the Los Angeles stage premiere of Topokana Martyr’s Day and the U.S. National Tour of the smash Broadway hit Romance, Romance.

For 4 years, Noone served as the winsome host of VH1’s My Generation, the highest rated half hour retrospective of popular music ever. He also hosted the informative PBS Special The British Invasion Returns and recorded the title song for the Kirk Douglas film Diamonds.

Accompanied by his band, Herman’s Hermits, Noone consistently plays to sold-out venues the world over. He has a legion of faithful fans (known as “Noonatics”) whose loyalty is unparalleled.