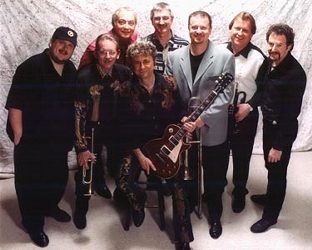 With its signature horn riff and one of the most famous opening lines in rock’n’roll, “I’m the friendly stranger in the black sedan, won’t you hop inside my car”, the Ides of March’s “Vehicle” has earned it’s place in rock history, but the story behind The Ides of March has a resonance that few bands can match.

The Ides are commonly referred to as “Chicago’s Band” and it’s easy to see why. Formed in 1965 in the Chicago suburb of Berwyn, all the members: Jim Peterik – lead vocal, lead guitar; Larry Millas – vocals, guitar, bass; Bob Bergland – bass, vocals, sax; Mike Borch – drums, vocals; Chuck Soumar – trumpet, percussion, vocals; and John Larson – trumpet, vocals have been friends since grade school. As freshmen and sophomore at Morton West High School studying Julius Caesar, the Ides of March were formed. The band developed a strong local following. Their determination led to a contract with London Parrot Records and their first single, “You Wouldn’t Listen”, which made it to #42 on the Billboard charts and #7 on Chicago’s WLS survey in the spring of 1966.

The Ides of March toured America and Canada on weekends while keeping up their high school education. In 1970 they got their big break. Warner Bros. Records signed them and released their million-seller, “Vehicle”. The song went to #1 in Cashbox and #2 in Billboard and became the fastest breaking single in Warner Bros. history.

The Ides, now in college, toured with bands such as Led Zeppelin, the Allman Brothers, Janis Joplin, Jimi Hendrix, the Grateful Dead and Poco. They appeared on many television shows including Dick Clark, Mama Cass, John Byner, Dennis Holey and many more. “Vehicle”, which Jim Peterik wrote and sang, has since become a horn band classic, being performed on the Tonight Show by Tom Jones and Sammy Davis Jr. It also became the centerpiece of Sylvester Stallone’s motion picture smash, Lock Up.

In 1971, the Ides released “L.A. Goodbye” which stayed at #1 for five weeks on the Chicago charts. It is still a much requested song at radio, currently on heavy rotation on The Drive, 97.1 in Chicago. In 1973, after 15 singles and 4 albums, the Ides went on a 17-year sabbatical. Jim Peterik went on the platinum success as co-founder, song-writer and keyboardist with the group, Survivor, co-penning all of their hits including the motivational anthem from Rocky III, “Eye Of The Tiger”, as well as “The Search Is Over”, “High On You”, “I Can’t Hold Back” and “Burning Heart” from Rocky IV. He also co-wrote hits for 38 Special including “Hold On Loosely”, “Caught Up In You”, “Fantasy Girl” and “Rockin’ Into The Night”. He and Sammy Hagar wrote “Heavy Metal” for the animated classic of the same name. Many of these songs can be heard in a typical Ides set arranged in true Ides of March fashion.

In 1990, the original six members of The Ides of March with the addition of long-time friend Scott May on keyboards and Dave Stahlberg on trombone reunited for what was supposed to be a one-time concert for Berwyn’s Summerfaire. The event drew 25,000 fans and convinced the Ides to extend their tour indefinitely. Each year, their fan base continues to grow, not only drawing their loyal followers, but also their children and grandchildren. The Ide’s goodtime spirit never grows old!