For some time Gerry & the Pacemakers were the Beatles nearest competitors in Britain. Managed, like the Beatles, by Brian Epstein, Gerry Marsden and his band burst out of the gate with three consecutive number one UK hits in 1963, “How Do You Do It”, “I Like It”, and “You’ll Never Walk Alone”. Gerry & the Pacemakers defined Merseybeat at its most entertaining, performing bouncy, catchy, and utterly memorable tunes driven by rhythm guitar and Marsden’s chipper vocals. Their hits were certainly likable and energetic, and are fondly remembered today. 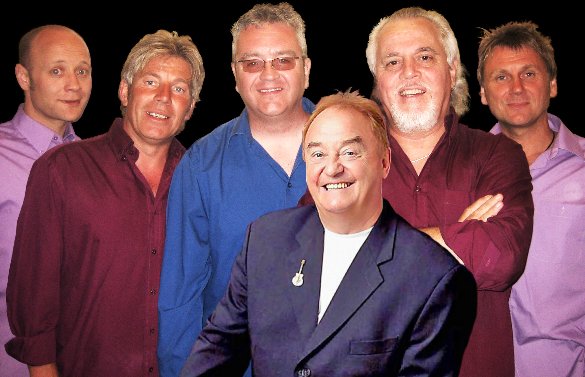 Marsden formed the group in the late ’50s, calling themselves, The Mars-Bars, featuring himself on guitar and lead vocals, his brother Fred on drums, Les Chadwick on bass, and Arthur Mack on piano (to be replaced in 1961 by Les McGuire). They worked the same Liverpool/Hamburg circuit as the Beatles, and ran neck and neck with their rivals in local popularity. They were signed by Epstein in mid-1962 (the first band to do so besides the Beatles), and began recording for the EMI/Columbia label in early 1963, under the direction of producer George Martin. Their first single was a Mitch Murray tune that Martin had wanted the Beatles to record for their debut, “How Do You Do It?”. The Beatles did record a version (found on the Anthology 1 release), but objected to its release, being more interested in recording their own original compositions. It suited Gerry’s grinning, poppy style well, and went to No. 1 as soon as it was released.

The Pacemakers would never vary much from the clattering guitar-dominated pop of their first singles, turning again to Mitch Murray for the follow-up, “I Like It”, and remaking an old pop standard for their next single, “You’ll Never Walk Alone”. It’s not universally known that Gerry Marsden actually wrote much of the band’s material, and he penned most of their subsequent hits, including “It’s All Right” (their gutsiest and best performance) and “I’m the One”. He also wrote “Don’t Let the Sun Catch You Cryin'” (sharing credits with the rest of the group) and “Ferry Cross the Mersey”, ballads that Martin embellished with light string arrangements.

Like the Beatles, Gerry & the Pacemakers got to star in their own film, Ferry Cross the Mersey. In 1966 the group had their last American Top 40 hit, “Girl On A Swing”. The Pacemakers disbanded that October.

Gerry reformed The Pacemakers in 1974 after 8 years as a solo artist, touring the world. Another grand tour took place in 1993 to mark 30 years of Gerry & The Pacemakers. “I love being on stage performing for people all over the world” said Gerry, smiling that cheeky smile that has become one of his trademarks over the years.

Gerry wrote his autobiography with Ray Coleman in 1993. In this compelling story, Gerry Marsden emerges as a driven man, an artist with enormous confidence and a unique spirit, from his streetwise boyhood and early love of music to his friendship and keen rivalry with The Beatles, hunger for fame and hard won success, his story is one of grit, warmth, humor and determination. The book became the basis of a Musical Theatre production “Ferry Cross the Mersey” a musical story of Gerry’s Merseybeat days. It enjoyed a sell out premiere in Liverpool and went on to a successful tour of the UK, Australia and Canada.

Gerry continues to pack them in wherever he plays.

BOOK GERRY AND THE PACEMAKERS