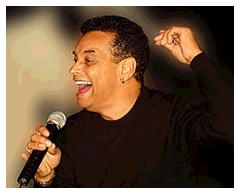 The follow-up was the now legendary ‘party’ record, “Quarter to Three”, a number one hit with a spirit and energy that would eventually inspire and influence a generation.

Over the next three years, Bonds co-wrote and recorded hit after good-time hit: “School is Out”, “School is In”, “Dear Lady Twist”, “Twist, Twist Senora”, “Seven Day Weekend” and others. He performed throughout the world, rising to a status so high that on a 1963 tour of Europe, he headlined above a group of relative newcomers … the Beatles.

A rare distinction for Gary is that he managed to transcend the decades with hits. His inspiration for Bruce Springsteen and Steven Van Zandt, who had grown up on Bonds’ music led to a chance meeting in 1980. A friendship developed and, shortly after, a musical collaboration which resulted in Bonds’ “Dedication” and “On the Line” LP’s, with singles: “This Little Girl Is Mine,” “Out of Work,” “Jole Blon” and “Daddy’s Come Home”. Reviews noted “His gritty, soulful and powerful vocals … even better than before….”

While he has continued to perform, Gary also keeps active as a songwriter. His success as a songwriter even garnered him a nomination for the Country Music Association’s “Songwriter of the Year”.

Gary is an honoree of the Rhythm & Blues Foundation, a “favorite son” of the Blues Brothers and a highly respected golfer, often invited to play at celebrity PGA events.

Music critics have described Gary as “a wonderful performer.”  Rolling Stone Magazine writes ” a unique and expressive voice”, “impassioned, scorched soul singing”, and “some of America’s best rock and roll”

Gary tours with his group, the very highly regarded and powerful Roadhouse Rockers, performing his hits, some new songs, some rockin’ R&B Blues and generally thrilling all audiences.