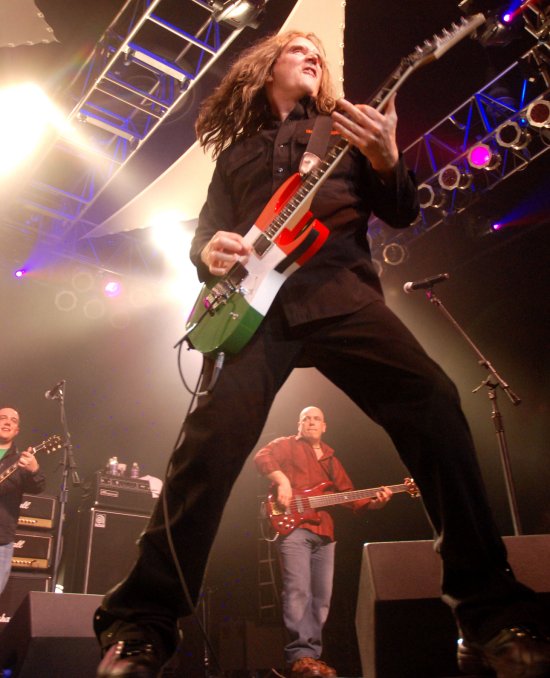 In 1984, a young rock vocalist named Fran Cosmo joined forces with Barry Goudreau, guitarist for a group which became one of the cornerstones of the American “classic rock” genre – Boston. Not only was this a major evolutionary step in the rock-n-roll career of Fran, but also the formation of a musical wormhole, extending toward the future. Orion the Hunter, as the new group would name themselves, produced their self titled album and hit single “So You Ran” (written by Fran Cosmo and Barry Goudreau). The song became an instant AOR radio hit & popular video on the then fledgling MTV, Friday Night Videos and various other music video programs. Shortly thereafter Fran’s band was invited on a US tour with Aerosmith for the “Back in the Saddle” Tour.

In 1991, Fran took the next step in his musical evolution when he was invited to become the new lead vocalist for Boston. Original Boston vocalist Brad Delp was busy with his side project RTZ. What followed was Brad Delp rejoining Boston, with both Fran and Brad singing side by side, sharing vocal duties on two Boston albums and international LIVE tours. Fran sang on Boston’s “Corporate America” album and helped produce three of the songs on that same album. Fran was also featured on Boston’s “Greatest Hits” album. All of this has allowed Fran Cosmo to bring his vocal talents to millions world wide.

In 2004, Fran Cosmo’s band concept began following the Boston tour of 2004, with Fran and Anthony Cosmo teaming up for what ultimately became the 2006 world wide release of the record “Alien” under the Frontiers record label.

Since then, Fran has played to audiences too numerous to count. He is currently touring and performing with Anthony Cosmo, former guitarist and songwriter of the band Boston, performing all the greatest hits as well as the New Hits from the 2006 Frontiers records release, “Alien”, which garnered high acclaim throughout Europe and Asia and was voted one of the top records of the year by Melodic Rock.com.