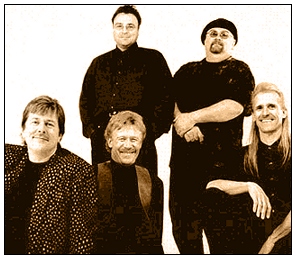 In 1973, when Florida-born Rick Roberts and his new Colorado based band needed a name, an image that had long stuck in his mind –  a woodpile stacked at the edge of a high cliff in Yosemite National Park, then set ablaze and pushed off the cliff as nature lovers from all over watched in awe – provided the inspiration and the group was christened Firefall.

That seems an especially appropriate handle for the country-flavored rock ‘n’ roll band that carried the torch of musical forebears such as The Byrds, Buffalo Springfield, and The Flying Burrito Brothers into the mid 70s and beyond. While former Flying Burrito Brother Rick Roberts handled vocals, guitar and most of the songwriting duties, fellow ex-Burrito and Byrd Michael Clarke was on drums. Ex-Spirit and Jo Jo Gunne bassist Mark Andes, guitarist and vocalist Jock Bartley, guitarist, vocalist and songwriter Larry Burnett rounded out the band, and they were joined in 1977 by keyboardist and woodwind player David Muse. For the better part of the next decade, Firefall burned it at both ends, musically and personally, and then appeared to flame out, at least on record. By 1983, they’d cut eight albums (scoring gold for the first three, with the third going on to platinum-plus), and put 11 singles on the charts, including such unforgettable tunes as “You Are The Woman”, “Just Remember I Love You”, “Cinderella” and “Strange Ways”.

Throughout the 1980s, the band continued to tour and were a popular live act,  playing fairs, festivals, theaters and bigger clubs, and occasionally joined their friends The Doobie Brothers, The Beach Boys, Little River Band and Bob Seger on bigger stages. Firefall’s original singles were still faves with pop and A/C radio audiences, and as the classic rock radio format evolved, a number of the band’s songs enjoyed renewed exposure. For much of the decade of the ’80s, Jock Bartley was the only original member left, although David Muse would return to the touring unit for stints sometimes lasting a year or more, and Rick Roberts returned for another stint as the group’s frontman.

In 1992, Rhino Records, responding to the clamor to put out a CD of all the great Firefall music, released Firefall: The Greatest Hits.  The CD not only featured all of the favorites, it included one previously unrecorded new song, Bartley’s “Run Run Away”, about the adult victims of past child abuse.

While touring the Midwest in 1993, Firefall encountered first hand the early devastation of the terrible Flood of ’93. In cities like Alton, Illinois, Des Moines, Iowa and St. Louis, the band felt the tragedy and overwhelming impact of the flood. One of their gigs was canceled and a few had to be moved back from danger. The night they returned home to Colorado, a song woke Jock up at 4:00 AM – he sat up in bed in the dark with the hook playing in his head. Getting up, he hurried into his music room and, 20 minutes later, “When The River Rises” was finished. It is a uplifting song with a positive message of gaining strength in adversity. it was played on the radio for the first time in St. Louis before the the flood waters had crested. Vowing to give a large portion of the publishing to Flood Relief, the song was sent to numerous radio stations in a dozen flooded states. Soon it was receiving heavy regional airplay and was used by CNN and other TV networks and stations behind coverage of the disaster.

The band has been involved with a number of social causes, trying to give a little something back to people, supporting many children’s causes. When Jock Bartley was asked to compose a song for Suicide Prevention, he wrote the heartfelt “Call On Me” which became the anthem of the cause.  In the process, Jock became a national spokesperson. In September 2005 Steve, Chris and Jock twice performed as ‘Acoustic Firefall’ at live benefits and radio fundraisers for Hurricane Katrina victims, helping to raise over $35,000 for the Red Cross. Also in September 2005, Steve and Jock played at a ‘Rockers For Kids’ benefit for Denver Children’s Hospital raising money for teens at risk – three of Jock’s paintings hung in the art exhibit that featured rock & roll artists Paul McCartney, David Bowie, Jerry Garcia, John Entwistle, Ron Wood, John Mellencamp and others.

As their music was grew and evolved, Firefall continued to wow audiences nationwide with their musicianship, singing, professionalism and energy.  The group endures because of the strength and integrity of their music. In concert, they can play over an hour of nothing but hits and radio recognizable tunes.

Firefall flourishes because of the energy and spontaneity that is so evident on stage and in the studio.