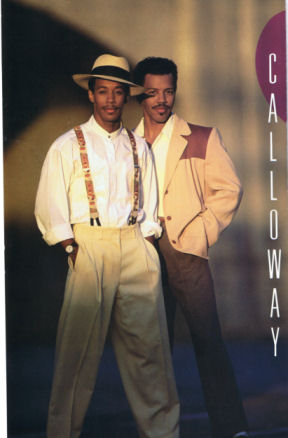 Reggie and Vincent Calloway’s songs have been nominated for 5 Grammys. They recorded over ten #1 singles and were voted by Billboard magazine as one of the greatest music production teams of all time. Their prolific talents as top music producers, hit writers, musicians and artists have attracted some of the biggest names in music.

One of Calloway’s original compositions entitled, “I’ll Be Good For You”, was featured on N’Sync’s multi-platinum CD, “No Strings Attached”, proving their ability to break age barriers by working with current artists and legends. Their music has been covered by Hip hop artist like Snoop Dog, Twista and many more.

Best known as the founders and leader of one of the most popular Techno Funk bands, “Midnight Star”, the Calloways lead the group to international success, writing, producing and arranging a string of top mega #1 hits which include,“Operator”, “No Parking On The Dance Floor” and “Freak-a-zoid”, not to forget the #2 Pop Anthem, “I Wanna Be Rich”, performed as the duo Calloway. This song lives on today as a motivational tool for corporations, businesses and financial wizards like Suze Orman and Donald Trump.

The Ohio natives captured the respect of the music industry insiders for consistently writing a string of Grammy nominated #1 hits for Teddy Pendergrass, Natalie Cole and LeVert, to name but a few. In 1987 they wrote “Love Overboard” for Gladys Knight and The Pips, which won a prestigious Grammy, increasing their statute in the music industry tremendously.  That same year, the music pioneers received a Grammy nomination for R&B Songwriter of the Year for the hit song “Casanova” in 1987.

Their songs have been featured in films including “Deep Cover”, “Wood”, “How To Be A Player” and “The Pickup Artist”. Some of Calloway’s television credits include “The Simpson’s”, “Ellen Degeneres”, “Soul Food”, “Beverly Hills 90210” and “The Oprah Winfrey Show”.

From Solar Records to writing signature songs for Midnight Star, the Calloways remain on the frontline, developing unique lyrics and ear catching melodies.