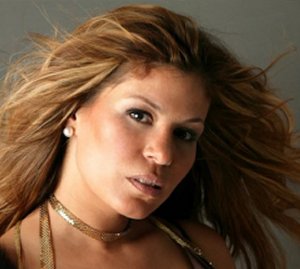 Brenda K Starr has been playing to packed venues all over Latin America with her fantastic sixteen piece orchestra. She continues to wow Latin audiences with her amazing talent and a live show that is second to none.

Born and raised in New York City, of Puerto Rican extraction, by age of 8, Brenda was already singing. By 12, she had already auditioned for many TV commercials as well as theater opportunities. As the break-dance fever emerged out of New York’s projects, Brenda joined the Dynamic Dolls. “My dream was to sing, and since I couldn’t do it in a studio, I used to do it in the stairs of the building where I lived, just to hear the acoustics.”

At 14, Brenda met Harry Belafonte on an audition for the musical, “Beat Street”, who was captivated by her voice. Brenda landed a production deal and two songs on the film’s soundtrack, a truly impressive start. She was offered a recording deal on the Mirage record label, at the time distributed by Atlantic Records. In the late 80s, Brenda was the undisputed queen of freestyle and house music.

Her hits included the Grammy-nominated # 1 pop ballad “I Still Believe” and the club/dance smash “What You See is What You Get”. The first was re-recorded and turned, once more, into a mega hit by one of Brenda’s back up singers at the time, the international superstar Mariah Carey. At the same time, Brenda was developing a name for herself in both the “Pop” and “Salsa” music scenes. Brenda’s Spanish influence soon began to emerge. Her first Spanish album release “Te Sigo Esperando”, was certificated Gold then Platinum by the RIAA. It was followed by three Spanish language albums, “No Lo Voy A Olvidar”, “Petalos de Fuego” and the critically acclaimed “Temptation”, which in 2002 garnered two Latin Billboard Awards for Hot Latin Track of the Year-Vocal Duo and Tropical /Salsa Airplay track of the Year-Female.

The singer continued her career moving into her native Salsa roots with a major hit on the SONY label, singing with internationally acclaimed crooners like Victor Manuelle and Tito Nieves. After leaving Sony, Brenda took a hiatus to focus on her family life and evaluate her next journey. She began a new musical venture, “Under the Stars with Brenda K Starr”, her own radio show, which aired every Sunday night on Mix 102.7, presenting a new side to her multifaceted personality. She partnered with lifelong friend John Holohan for a new musical production, “Atrévete A Olvidarme”. The album’s success resulted in multiple nominations at both Billboard and Premio Nuestro. The continued release of hit after hit in the Latin market provided an amazing foundation for her extremely successful tour throughout all of Latin America.

Brenda K Starr delivers an authentic Latin and Pop sound. For almost two decades, Brenda and her band have been touring many Latin countries along with the Northeast, and US. Brenda’s performance is sure to keep you on your feet. She gets the crowd involved and leaves you wanting more.