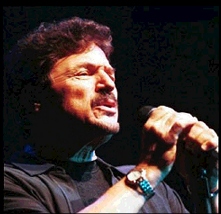 Starting music at the age of 8 years old may seem a bit odd to some, but that’s when Bobby Kimball began playing and singing with a band comprised of younger brothers of his oldest brother’s band.

Bobby came from the Louisiana area and had several bands that played clubs between an area from Phoenix, Arizona all the way to Florida. It was while playing in one for these bands that Bobby received a phone call that would change his life and career forever.

It seemed that after the singers from Three Dog Night left the band the group members decided to form a band called S.S. Fools. Bobby was called by a friend of his, John Smith, who played with Edgar Winter’s White Trash and asked to sing with their band. After signing with CBS records and doing one album, the band just couldn’t seem to get off the ground. However, during this period with S.S. Fools, Bobby met three of the members of the band that would catapult his career into another categorical dimension.

These players, David Paich, David Hungate, and Jeff Porcaro had been playing with the enormously successful band Boz Scaggs and were mainly responsible for his hits like Low Down and Lido Shuffle.

David Paich and Jeff Porcaro mapped out a plan for a new band that would set new records in the recording industry and the music community in general. That band was called TOTO after Dorothy’s little dog in The Wizard of Oz. The members, David Paich, Jeff Porcaro, Steve Lukather, David Hungate, Steve Porcaro and Bobby Kimball embarked on a new sound that challenged the abilities of even the finest of players and singers.

The first album TOTO was nominated at the Grammys as Best New Group. The first single – “Hold The Line”, made Bobby’s voice a signature of TOTO’s music and launched several hits thereafter, including songs like “I’ll Supply The Love”, “White Sister”, “Make Believe”, “Africa” and, of course, “Rosanna”, the song on the TOTO IV album that swept the 1983 Grammy show. The TOTO IV album was nominated for no less than 9 Grammys and the band as a whole won a total of seven of these categories.

After the fourth album and some conflicts with the band, Bobby decided to move to Europe for a few years where he was asked to do an album for Germany’s top producer Frank Farian, The album was never officially released in the USA, however it made the top ten charts in Europe with the first single, a remake of Led Zeppelin’s Stairway To Heaven. Bobby was then introduced to Michael Berresheim, another person who would change his life and career. Michael and Bobby started a new record label in Europe called MMS records. The label has experienced great success in the few short years of its existence.

The latest product on the label is Bobby’s first solo album named Rise Up. The album has already been released in Europe and is enjoying a successful entry into the European charts. Bobby says “This is my first chance to express myself without having to go through five other opinions, and I thought it was fun to make the final decisions this time”.