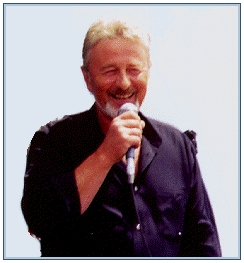 If you have heard the hits “My Baby Loves Lovin”‘, “Beach Baby”, “United We Stand”, “Gimme Dat Ding”, “Love Grows (Where My Rosemary Goes)” and the unforgettable Coke commercial “I’d Like to Buy the World a Coke” you have definitely heard Tony Burrows.

British session vocalist Tony Burrows is probably the only singer who can claim he was a one-hit wonder five times.

Lending his vocal talents to over 20 “studio” groups, he had five Top 15 hits between 1970 and 1974. The connection between each of these groups Edison Lighthouse, White Plains, The Pipkins, The Brotherhood of Man and First Class is that the lead singer was the same person: Tony Burrows!

The endearing bubble-pop nugget, “My Baby Loves Lovin”‘, rocketed to No. 13 with White Plains in 1970.

That same year, “Gimme Dat Ding” reached 99 hit with The Pipkins. It was written for a children’s album called Oliver and the Overworld and was actually a conversation between a metronome and a pianola.

“United We Stand” reached the Top l5 with The Brotherhood of Man again in 1970.

Edison Lighthouse’s “Love Grows (Where My Rosemary Goes) reached No. 5 and earned Tony a gold record, for a total of 4 hits in that same year.

He also caused quite a stir when on a single episode of Top of the Pops, Tony had to appear 3 times with 3 separate bands.

Tony Burrows is listed in the Guinness Book of Records as having had the most records in the charts at the same time under different names.

In 1996, Varese Sarabande Records released Love Grows (Where My Rosemary Goes): The Voice of Tony Burrows, which featured songs by nine different bands Tony worked with, along with some terrific solo tunes.